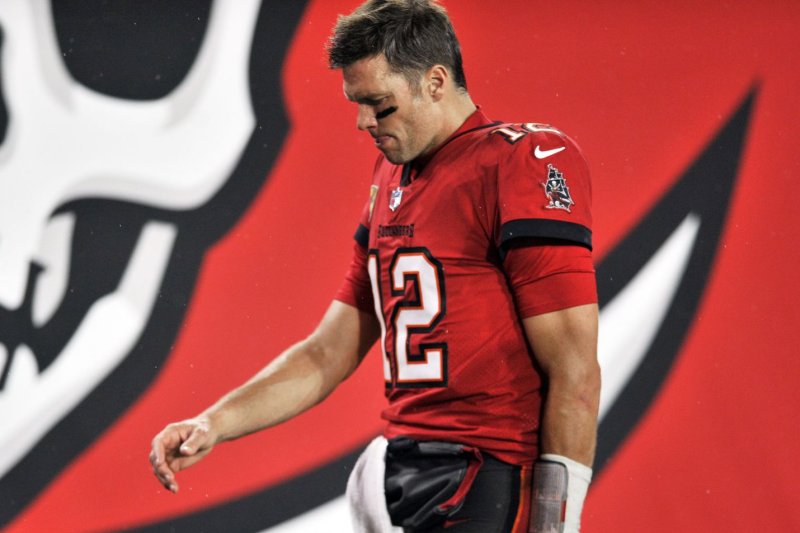 Tampa Bay Buccaneers quarterback Tom Brady failed to throw a touchdown pass for the first time in a game this season in a Week 9 loss to the New Orleans Saints on Sunday in Tampa, Fla. File Photo by Steve Nesius/UPI | License Photo

Brees completed 26 of 32 passes for 222 yards in the 38-3 triumph Sunday night at Raymond James Stadium in Tampa, Fla. The Saints outgained the Buccaneers 420 to 194 in total yards.

"It's about playing better and execution and we all have to do our jobs a lot better," Brady told reporters. "When you play good teams there's little margin for error. They've been a great team for a long time.

"They've got a lot of good players. If we're going to beat them we've got to play a lot better than we did."

Brady's Buccaneers went three-and-out on the game's opening possession before the Saints used a nine-play, 65-yard drive to take a 7-0 advantage. Brees threw a 14-yard touchdown toss to Tre'Quan Smith to end the drive.

Brees threw another touchdown to Saints tight end Adam Trautman at the end of the first quarter for a 14-0 edge.

Brees connected with Emmanuel Sanders for a 12-yard touchdown on the Saints first drive of the second quarter and Saints running back Alvin Kamara scored with 8:49 to go in the first half for a three-score lead. Saints kicker Wil Lutz later made a 36-yard field goal to give New Orleans a 31-0 lead at halftime.

Neither team scored in the third quarter, but Brees threw a three-yard touchdown pass to Josh Hill about six minutes into the final frame to push the Saints lead to 38-0.

Buccaneers kicker Ryan Succop made a 48-yard kick with 5:57 remaining for the final points of the night.

Brady completed 22 of 38 passes for 209 yards and failed to throw a touchdown pass for the first time in a game this season. The Buccaneers totaled eight rushing yards.

Malcolm Jenkins, David Onyemata and Marcus Williams each had interceptions for the Saints.

"I'd say these [performances] are rare, especially against as good a football team as the one we just played," Brees said. "As many weapons as they have on the offensive side of the ball, our defense just played phenomenal, really contained and bottled up. The pass rush did a phenomenal job.

"I mean, really, it all starts there, I think on both sides of the ball. ... So all the way around, it was a really solid performance by the entire team."