MIAMI, Sept. 21 (UPI) -- Quarterback Josh Allen believes he can escape any defender's grasp. That confidence, and his emergence as a passer, has helped the first-place Buffalo Bills brush off doubts and become a balanced NFL juggernaut.

"I want to do whatever it takes to win," Allen said Sunday. "That's always been my motto and will forever be my motto."

The 6-foot-5, 237-pound quarterback showed off his physicality just before halftime of the Bills' win over the Miami Dolphins Sunday in Miami.

He spun out of a tackle in the backfield before he ran through a linebacker and shoved him to the turf. He then lowered his shoulders and careened into a 275-pound defensive lineman and dove near the first down marker.

"It's definitely a spark for us," Bills wide receiver John Brown said. "It's scary when Josh hits somebody. They don't like it too much, but it does give us a spark."

Allen's coaches don't like those runs too much, either, as they often lead to injuries, but the method to the madness has inspired production the Bills haven't had for the better part of a decade.

"It's probably not the smartest thing to do," Allen said of his runs. "But I will take myself every time [in matchups vs. defenders]."

Now, with the addition of proven speed threats at wide receiver on the roster, Allen has evened the scales for a Bills offense that was run-dominant last season.

The Wyoming product completed 68 percent of his throws for 417 yards and four touchdowns Sunday. He is just the fourth quarterback in NFL history to pass for more than 700 yards, six touchdowns and no interceptions through the first two weeks of a season.

"Dang, I didn't even know he did that," Bills safety Micah Hyde said of Allen. "It's a dangerous thing in this league when a quarterback gets confidence. Seeing him light up defenses is remarkable.

"We stay in his ear all the time and [tell him] how good he is. A performance this solidifies it."

Allen has often been criticized for his lack of accuracy as a passer. Those issues surfaced again when he missed a wide open Stefon Diggs in the first quarter on Sunday. But he elevated his play after his bruising run.

It was that competitiveness the Bills saw in Allen early on. His other abilities now are being honed as he becomes a more complete player.

"He has ice water in his veins," Bills coach Sean McDermott said of Allen. "There is no moment too big from him.

"That was true from the moment we got him here. I'm proud of the way the guys are developing [the same] mindset. Josh does a great job of leading by example."

Cleveland Browns quarterback Baker Mayfield and the New York Jets' Sam Darnold were Top-3 NFL Draft picks in 2018, before Allen landed with the BIlls at No. 7.

Mayfield and Darnold received praise at the time as the more malleable quarterbacks for NFL systems, while scouts saw Allen as more of a project who had incredible speed and arm strength.

Baltimore Ravens quarterback Lamar Jackson also received criticism as a passer before he was drafted at No. 32 overall in 2018, but is now the reigning NFL MVP.

Darnold's squad has become one of the worst in the NFL, and Mayfield's Browns have yet to post a record over .500. Critics now speculate about if Mayfield and Darnold are franchise quarterbacks.

Allen shut off that outside noise and self-reflected while he -- like everyone else -- was stuck indoors as the coronavirus pandemic swept through the United States.

He used the time to study offensive line protections and quiz himself about how to adjust to defenses when he doesn't like pre-snap matchups.

"It's [about] knowing the answers if you see something and getting yourself out of a bad situation," Allen said. "That's the job of the quarterback. It's not always about getting in the right play, but also getting out of wrong plays."

Allen's success has the team in position to win a division title for the first time since 1995. The Bills appear to have their franchise quarterback and he now has weapons to showcase a well-rounded game.

Stefon Diggs and Adam Thieln were one of the best wide receiver duos in the NFL from 2015 to 2019. Diggs joined the Bills in March in a blockbuster trade from the Minnesota Vikings.

On Sunday, he showed why the Bills made the move, with 153 yards and a touchdown. He teamed up with John Brown to torch the Dolphins secondary, which features two All-Pro cornerbacks.

Allen fit throws into tiny windows, out of reach for defenders and onto the fingers of his targets. Brown and fellow wide receiver Cole Beasley joined the Bills last off-season in free agency. The team also picked Gabriel Davis in the 2020 NFL Draft.

Diggs, Brown, Davis and tight end Reggie Gilliam each caught touchdown passes in Sunday's win. The new weapons have not only brought balance to Allen's game, but also to a Bills team that once was just known for its defensive prowess and now must be respected offensively.

"Some defensive coaches like winning 11-9, but I don't," McDermott said. "I like winning, but to have a good football team you need to be balanced.

"I think you are seeing the result of that. It's important we remain humble and hungry. It's hard to win every week in this league." 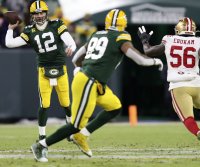