Gostkowski, 36, spent 14 seasons with the Patriots before he was released in March. He was teammates with Titans coach Mike Vrabel from 2006 through 2008 when both played for New England.

The Titans waived kicker Greg Joseph to make room on their roster for Gostkowski.

Joseph, 26, made 9 of 9 extra point attempts, but did not attempt a field goal in two appearances last season. He joined the Titans in December off the Carolina Panthers practice squad after Tennessee released kicker Ryan Santoso and placed Ryan Succop on injured reserve.

Gostkowski -- a four-time Pro Bowl selection -- made 7 of 8 field goal attempts and 11 of 15 extra point attempts in four games last season for the Patriots, while limited by a hip injury.

He also won three Super Bowls with the Patriots and has appeared in the fourth-most playoff games in NFL history, behind only Tom Brady, Adam Vinatieri and Jerry Rice.

The Titans face the Denver Broncos in their first game of the season at 10:10 p.m. EDT Sept. 14 at Empower Field at Mile High in Denver. 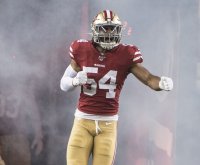