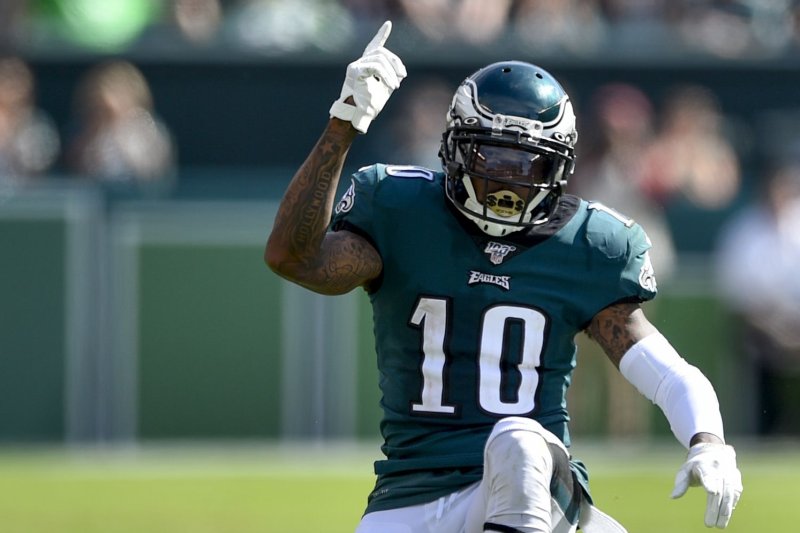 The Philadelphia Eagles said they would take "appropriate action" against wide receiver DeSean Jackson after he made anti-Semitic posts on social media. File Photo by Derik Hamilton/UPI | License Photo

July 8 (UPI) -- Philadelphia Eagles wide receiver DeSean Jackson has accepted an invitation to tour the Horwitz-Wasserman Holocaust Memorial Plaza in Philadelphia after he was criticized for anti-Semitic social media posts and apologized.

Jackson on Monday posted an image of a quote falsely attributed to Adolf Hitler. He posted additional messages supporting Nation of Islam leader Louis Farrakhan, who has been identified as anti-Semitic and homophobic by the Anti-Defamation League and Southern Poverty Law Center.

Jackson apologized for the posts Tuesday. The Eagles management spoke with Jackson and called the posts "offensive, harmful and absolutely appalling." The NFC East franchise said it will take "appropriate action" against him.

Former Eagles president Joe Banner has advocated for the team to have a serious conversation about releasing Jackson. The NFL also has condemned the posts.

"Just had a FaceTime call with [Jackson] and Michael Rubin," Adelman tweeted Tuesday. "DeSean apologized for his hurtful comments. As chair of the memorial, I offered to host him for an education session and tour of the plaza and he accepted.

"I'm confident we can turn this into a positive together."

It also features six rectangular pillars in memory of the 6 million Jews kill by Nazi Germany and its collaborators, in addition to other monuments and educational displays.

"People make mistakes sometimes -- what's matters is that you learn and grow from it and find away to turn it into a positive," Rubin tweeted. "I know DeSean -- he is not anti-Semitic and will now make a difference on these issues."

The Eagles' 90-man roster is scheduled to report to training camp July 28. The team plans to use the NovaCare Complex and Lincoln Financial Field in Philadelphia.