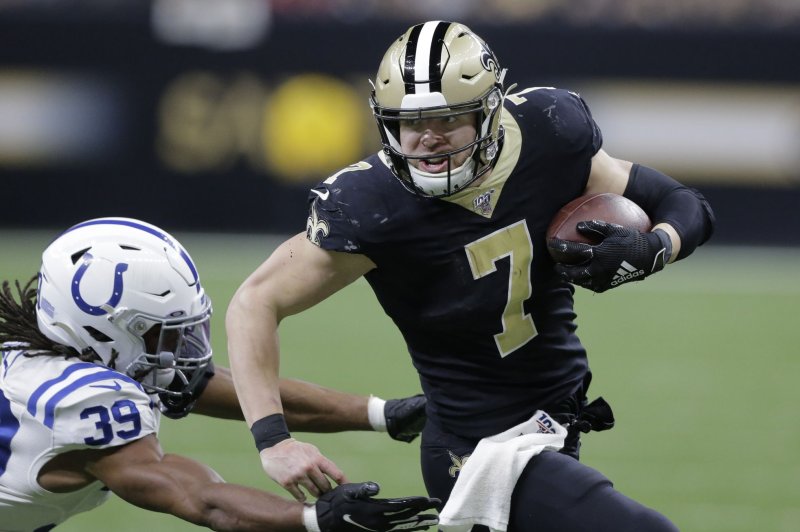 "There's ways to incorporate it much like Taysom Hill with the Saints," Favre told TMZ Sports. "Use him [Love] as a halfback, a halfback pass, but occasionally let him run it just to show that you'll do that. Something like that."

The Packers had one of the shock selections of the 2020 NFL Draft when they chose Love with the No. 26 overall pick despite Rodgers' presence as one of the premier quarterbacks in the league.

Hill has been one of the Saints' most dynamic players for the past two seasons. Saints coach Sean Payton -- known as an offensive guru -- uses Hill at quarterback, wide receiver, running back and elsewhere. Hill joined the team as an undrafted free agent out of Brigham Young University in 2017.

Rodgers told reporters in May that he "wasn't thrilled by the pick" of Love.

"It was more the surprise of the pick, based on my own feelings of wanting to play into my 40s, and really the realization that it does change the controllables a little bit," Rodgers said. "Because as much as I feel confident in my abilities and what I can accomplish and what we can accomplish, there are some new factors that are out of my control."

Favre is in a unique position to address the Love and Rodgers dynamic in Green Bay. The Hall of Fame quarterback was the Packers' starter from 1992 through 2007. The Packers selected Rodgers with the No. 24 overall pick in the 2005 NFL Draft. They traded Favre to the New York Jets before the 2008 season.

Favre was 36 when the Packers drafted Rodgers, the same age Rodgers was when the team selected Love. Favre and Rodgers had won Super Bowls with the Packers before the franchise drafted their potential replacements.

The 11-time Pro Bowl selection, three-time NFL MVP and Super Bowl champion told the Rich Eisen Show in April that Rodgers was "surprised" by the team's decision to draft Love. Favre also said he believes Rodgers will play somewhere else before he retires.

Rodgers is signed through 2023 but the Packers can opt out of his contract before the 2022 season.

Favre told TMZ Sports he "never got the sense" Rodgers was upset the Packers drafted a quarterback but he was more upset the team didn't upgrade at positions that could help them improve immediately.

The Packers are scheduled to face the Arizona Cardinals in a preseason game at 1 p.m. EDT Aug. 15 in Green Bay, Wis. They have a Week 1 match scheduled against the Minnesota Vikings at 1 p.m. EDT Sept. 13 in Minneapolis.