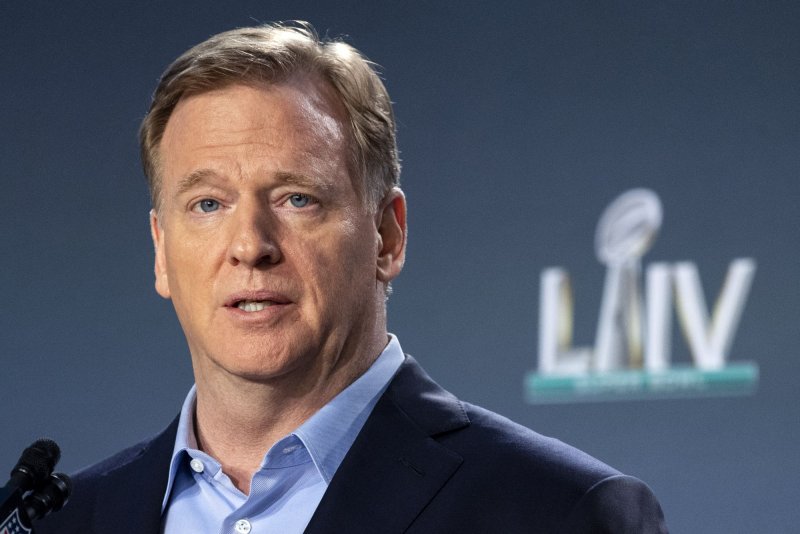 June 5 (UPI) -- NFL commissioner Roger Goodell issued a statement Friday and condemned racism, admitting the league was "wrong" for not listening to its players earlier about racial injustice.

"It has been a difficult time for our country. In particular, black people in our country," Goodell said in a video released on social media. "First, my condolences to the families of George Floyd, Breonna Taylor, Ahmaud Arbery and all the families who have endured police brutality.

We, the NFL, condemn racism and the systematic oppression of Black People. We, the NFL, admit we were wrong for not listening to NFL players earlier and encourage all to speak out and peacefully protest. We, the NFL, believe Black Lives Matter. #InspireChange pic.twitter.com/ENWQP8A0sv— NFL (@NFL) June 5, 2020

On Friday, Goodell answered the players' demands, adding that he will be reaching out to players who have previously raised their voices about racial inequality.

Racial injustice and police brutality were first brought to the NFL forefront in 2016, when former San Francisco 49ers quarterback Colin Kaepernick took a knee during the national anthem to peacefully protest and raise awareness for those issues. Kaepernick hasn't played a snap in the league since parting ways with the 49ers in 2017.

"Without black players, there would be no National Football League," Goodell said. "And the protests around the country are emblematic of the centuries of silence, inequality and oppression of black players, coaches, fans and staff.

"We are listening. I am listening. And I will be reaching out to players who have raised their voices and others on how we can improve and go forward for a better and more united NFL family."

Floyd, a 46-year-old black man, died while in police custody last week in Minneapolis after Derek Chauvin, a white police officer, knelt on his neck for more than eight minutes. His death sparked numerous protests across the United States and calls for racial equality.

Goodell released a statement about Floyd on Saturday. In the league's statement, the NFL said it was "saddened by the tragic events across" the country. Many players criticized the statement for a lack of specificity.

The NFL released a second statement related to Floyd's death before the players' video was published Thursday night.

"This is a time of self-reflection for all -- the NFL is no exception," the NFL said. "We stand with the black community because black lives matter."

The league also pledged to donate $20 million to support programs and initiatives around the country that "address systemic racism."

NFL // 17 hours ago
'Unwanted' QB Sam Darnold stung by trade, vies to improve with Panthers
April 13 (UPI) -- Quarterback Sam Darnold said he was "stung" when he became "unwanted" and traded away by the New York Jets this off-season to the Carolina Panthers, but is now focused on self-improvement and learning a new offense.