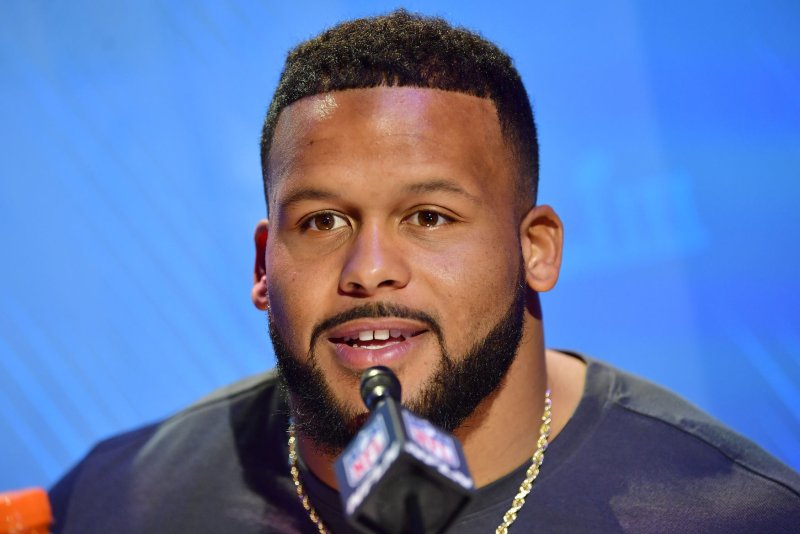 Star defensive lineman Aaron Donald and the Los Angeles Rams are scheduled to open the 2020 season against the Dallas Cowboys on Sept. 13 at the new SoFi Stadium. File Photo by Kevin Dietsch/UPI | License Photo

May 21 (UPI) -- Los Angeles Rams star defensive tackle Aaron Donald voiced his displeasure with the idea of playing NFL games without any fans in attendance this season.

"You need fans to play a game," Donald told reporters Thursday on a video conference call. "I don't see how you could play games with no fans. It takes all the excitement and fun out the game.

"... I feel like the fans is what pick you up. The fans is what makes the game exciting. The fans will give you that extra juice when you're tired and fatigued, when you make that big play and you hear 80,000 fans going crazy. That just pumps you up."

Donald and the Rams are scheduled to host the Dallas Cowboys in their regular-season opener Sept. 13 at the new SoFi Stadium.

California Gov. Gavin Newsom said earlier this week that professional sports in the state could begin to move toward a return in early June without fans.

The NFL allowed the reopening of certain team facilities this week to a limited number of staff members. The only players allowed to return are those who were rehabilitating injuries before closures, and no coaching staff members are allowed in facilities.

However, the Rams' facility remains closed to team personnel, except players who are going through rehabilitation for injuries, due to strict state regulations related to the coronavirus pandemic that have yet to be loosened.