April 24 (UPI) -- The first round of the 2020 NFL Draft, which was conducted virtually for the first time due to the coronavirus pandemic, was the most watched opening round ever, the league announced Friday.

The first round of the draft, which featured NFL commissioner Roger Goodell announcing picks from his New York home, drew 15.6 million viewers, representing a 37 percent increase over the 2019 draft.

The record viewership, which included numbers from ABC, ESPN, NFL Network, ESPN Deportes and other digital channels, shattered the previous record of 12.4 million viewers from the 2014 draft. Thursday night's draft coverage peaked from 8:45 p.m. to 9 p.m. EST, when 19.6 million viewers tuned in, according to the league.

The NFL "Draft-A-Thon," a fundraising initiative held in conjunction with the draft, had more than seven million viewers across multiple digital and social channels.

"The theme of hope is always prevalent in the NFL, especially with regard to the draft," Goodell said in a statement Friday. "In 2020, that's especially true, as we help honor healthcare workers, first responders, and others on the front lines of the battle with COVID-19 while giving our fans something to cheer about as we celebrate the next generation of NFL stars.

"We are so thrilled so many people were able to join us last night and we thank them for helping support the Draft-A-Thon."

The @nflcommish is signing these jerseys to be auctioned off as part of the #DraftAThon fundraiser for COVID-19 relief efforts! You can bid on them here-->https://t.co/wQXjQoOApK#NFLDraft #NFLDraft2020 pic.twitter.com/33YTzVXsIW— NFL Auction (@nflauction) April 24, 2020

NFL // 3 days ago
2022 NFL schedule release: Bills-Rams to kick off season; Broncos-Seahawks on 'MNF'
May 12 (UPI) -- The NFL will open its 2022 regular season inside Los Angeles' SoFi Stadium, as the defending Super Bowl champion Rams will host the Buffalo Bills on Thursday, Sept. 8.

NFL // 3 days ago
Patriots legend Gino Cappelletti, AFL's all-time leading scorer, dies at 89
May 12 (UPI) -- Gino Cappelletti, one of the original members of the then-Boston Patriots in 1960 and the American Football League's Most Valuable Player in 1964, has died. He was 89.

NFL // 5 days ago
Tom Brady to join Fox Sports broadcasting crew -- whenever he retires
May 10 (UPI) -- NFL quarterback and future Hall of Famer Tom Brady said on Tuesday that he plans to become a broadcaster for Fox Sports after he retires from pro football -- whenever that is. 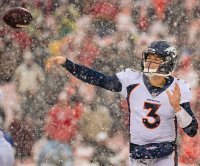