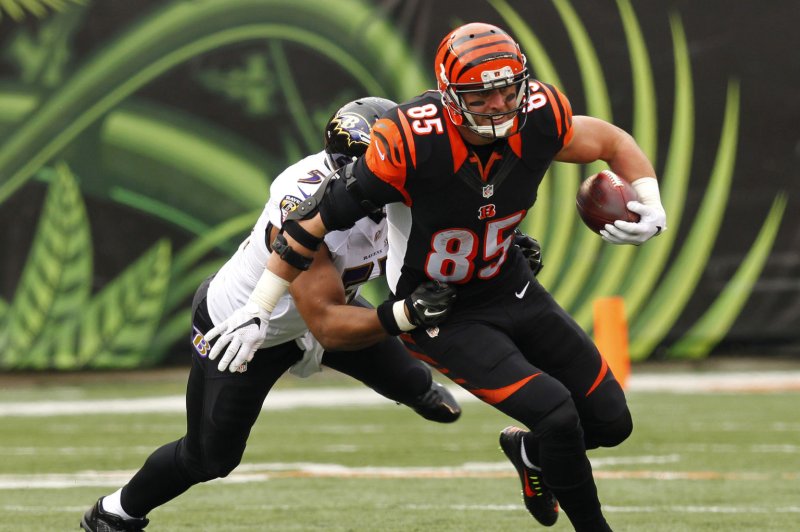 March 24 (UPI) -- The Jacksonville Jaguars are signing former Cincinnati Bengals tight end Tyler Eifert in an effort to fix their struggles at the position.

League sources told ESPN and NFL Media on Tuesday that the oft-injured Eifert agreed to a two-year deal with the Jaguars. Financial details of the contract weren't disclosed.

Eifert will become the top option at the position for second-year quarterback Gardner Minshew. The former Pro Bowler also will reunite with current Jaguars offensive coordinator Jay Gruden, who served in the same role with the Bengals from 2011-13.

The Jaguars have struggled to get consistent production at the tight end spot for the last decade. The franchise previously signed Julius Thomas (2016) and Austin Seferian-Jenkins (2018), but neither player made a significant impact on the field.

Jacksonville's current group of tight ends have totaled 64 career catches, including 60 receptions by James O'Shaughnessy, who is coming off a torn ACL.

Multiple injuries have impacted Eifert in his NFL career. The former Notre Dame star was limited to one game in 2014 because of a dislocated elbow, eight in 2016 due to ankle and back issues, two in 2017 for another back issue that required surgery and four in 2018 because of a gruesome ankle injury.

Eifert managed to avoid any injuries last season and played all 16 regular-season games for the first time in his career. He caught 43 passes for 436 yards and three touchdowns.

It was Eifert's most productive season since the 2015 campaign, when he made the Pro Bowl. He notched 185 catches for 2,152 yards and 24 touchdowns in seven seasons with the Bengals.