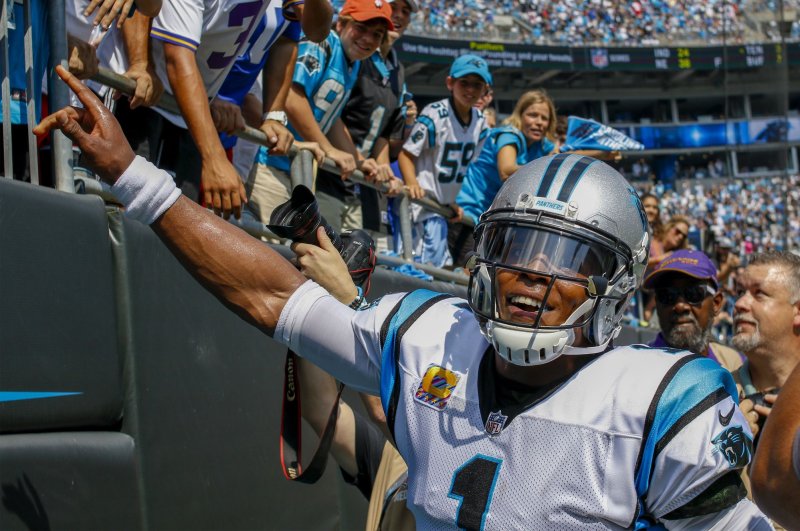 Former Carolina Panthers quarterback Cam Newton was selected by the franchise with the No. 1 overall pick in the 2011 draft. File Photo by Nell Redmond/UPI | License Photo

"Cam has meant a lot to this organization and the Carolinas," Panthers general manager Marty Hurney said in a statement. "Everyone saw his performances on the field. I had the privilege of seeing how hard he worked off the field, and his commitment to this team when no one was watching. He's the ultimate competitor and it physically hurts him to lose.

"He willed this team to victory on many occasions and will always be considered one of the greatest players in the history of this franchise. His contributions to this team, this community and the game of football will leave a lasting impact on our organization."

The release of Newton concludes the star quarterback's nine-year tenure with the franchise. Last week, the Panthers signaled the end of his time in Carolina by giving him permission to seek a trade. Newton disputed that, writing on social media that the team "forced me into this."

Newton was scheduled to count $21.1 million against the salary cap this season, according to Spotrac. The release of the 2015 NFL MVP saves the franchise $19.1 million in cap space with only $2 million in dead money.

Newton, who underwent foot surgery in December, missed 14 games last season because of a Lisfranc injury. He also sat out the final two games of the 2018 campaign due to a shoulder injury that required surgery.

League sources told ESPN that Newton underwent a physical in Atlanta on Monday that was coordinated by the Panthers and his representatives. According to ESPN, his shoulder and foot are healthy and he passed the physical.

The Panthers cut Newton after failing to find a trade partner. Other NFL teams were unable to bring him in for a physical or workout because the league has halted those activities during the coronavirus pandemic.

"Right now, he's worth nothing until such time as people can work him out and give him a physical -- their own doctors give him a physical and then work him out," Pro Football Hall of Fame executive Bill Polian told ESPN. "It's unfortunate. He's got to prove he's healthy for a number of reasons, and right now he can't do that, for a number of reasons."

The three-time Pro Bowl signal-caller has played in 125 career games (124 starts) with the Panthers. Newton has completed 59.6 percent of his passes for 29,041 yards, 182 touchdowns and 108 interceptions.

Newton, who was selected by the Panthers with the No. 1 overall pick in the 2011 NFL Draft, was named first-team All-Pro in 2015 and guided the franchise to a Super Bowl appearance that season. Carolina suffered a 24-10 loss to the Denver Broncos in Super Bowl 50.