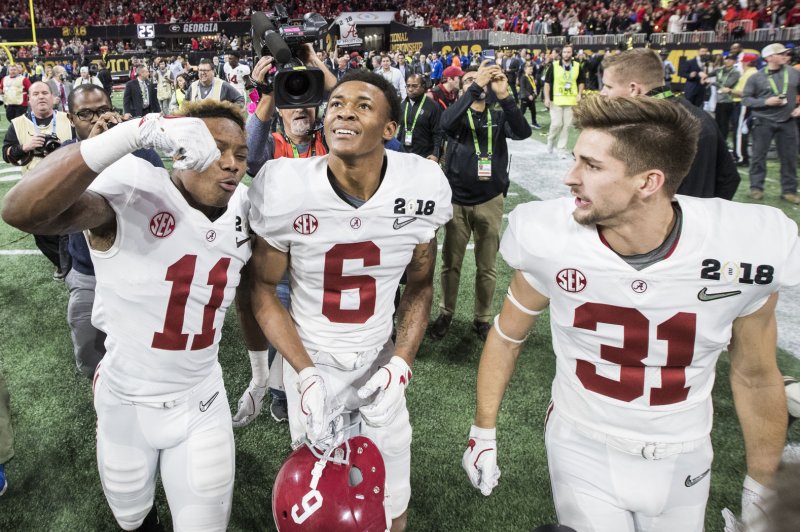 Former Alabama Crimson Tide wide receiver Henry Ruggs III (L) could be selected in the first round of the 2020 NFL Draft if he turns in an impressive NFL Scouting Combine performance this week in Indianapolis. File Photo by Mark Wallheiser/UPI | License Photo

Feb. 25 (UPI) -- Alabama's Henry Ruggs III is expected to have the fastest 40-yard dash at the 2020 NFL Scouting Combine, where top college prospects work out this week in Indianapolis ahead of the 2020 NFL Draft.

A total of 337 prospects were invited to the series of annual workouts, tests and interviews at Lucas Oil Stadium and the Indiana Convention Center. Players checked in at the Scouting Combine on Sunday and will stay until Monday.

Running a fast 40-yard dash can result in players receiving millions of dollars more in salary by being selected higher in the draft, which is set for April 23-25 in Las Vegas.

LSU quarterback Joe Burrow is expected to be the No. 1 overall pick. Ohio State defensive end Chase Young is also expected to be one of the first players taken.

While players meet with the media starting Tuesday, fans won't be able to watch them work out on the field until Thursday.

On-field tests for the prospects include a vertical jump, broad jump, 60-yard shuttle run, a three-cone drill and bench press, in addition to the 40-yard dash.

Ruggs clocked a time of 4.25 seconds in the 40-yard dash when he was a junior last year at Alabama's pro day. Multiple betting websites have the former Crimson Tide star as the favorite to have the fastest time of any prospect.

Cincinnati Bengals wide receiver John Ross has the record for the fastest 40-yard dash in Scouting Combine history. Ross ran a 4.22-second dash in 2017. Oddsmakers at BetOnline.AG do not expect Ross' record to be broken, as the website has -1,000 odds for the record staying intact and +550 odds for the record being broken.

Where: Lucas Oil Stadium in Indianapolis