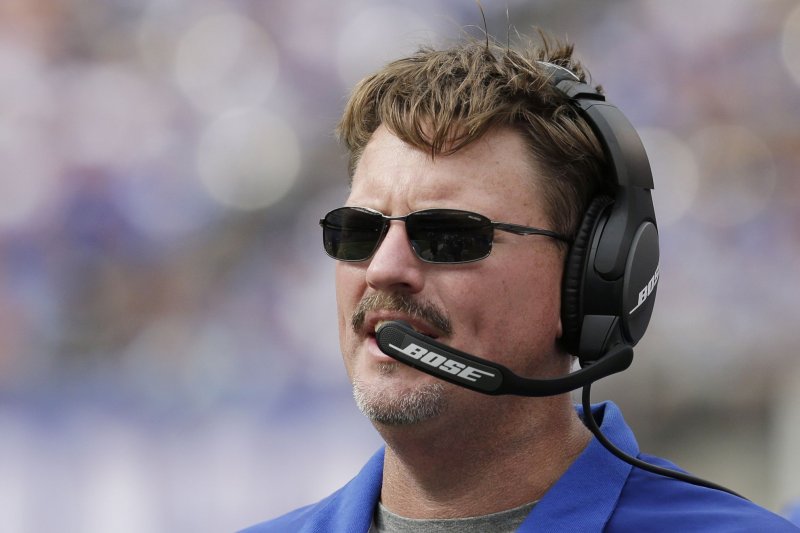 Former New York Giants head coach Ben McAdoo was fired by the Giants late in the 2017 season. He has been out of football the past two seasons. File Photo by John Angelillo/UPI | License Photo

Feb. 11 (UPI) -- The Jacksonville Jaguars are adding another former head coach to the team's offensive staff after agreeing to a deal with Ben McAdoo.

League sources told ESPN and the New York Post on Tuesday that Jacksonville is hiring McAdoo to be the Jaguars' quarterbacks coach. The team has yet to announce the agreement.

McAdoo, who was fired as the New York Giants' head coach late in the 2017 campaign, has been out of football for the last two seasons. He will join recently hired offensive coordinator Jay Gruden, who was the Washington Redskins' head coach for five-plus seasons, on Jaguars coach Doug Marrone's coaching staff.

McAdoo, 42, previously interviewed with Marrone to be the Jaguars' offensive coordinator, according to ESPN. The position became available when the franchise parted ways with John DeFilippo in January.

In less than two seasons with the Giants, McAdoo posted a 13-15 record in regular-season games. New York went 11-5 and lost a wild-card playoff game to the Green Bay Packers in his first season. McAdoo was fired after a 2-10 start in 2017.

McAdoo was the Giants' offensive coordinator from 2014-15 before being promoted to head coach after Tom Coughlin was fired. He also spent two seasons as the Packers' quarterbacks coach in 2012-13.