Lynch, who was named Big 12 Defensive Player of the Year in the 2019 season, made the announcement Monday on social media.

"Choosing Baylor was the best decision of my life," Lynch wrote on Twitter. "Receiving an education and playing football at this great university are easily some of my biggest blessings. My brothers and I poured our heart and soul into Baylor football as we transformed this program into the toughest, most competitive and hardest working team in the country.

"After much prayer and discussing my future with my family and coaches, I have decided it is time to go chase my next dream and that is playing in the National Football League. Thank you to my family, friends and the Baylor family for all your support. I would not be here today if it wasn't for y'all. I will forever bleed green and gold."

Lynch led the Big 12 in sacks with 13.5 and ranked second in the conference in tackles for loss (19.5). The junior defender lined up primarily at defensive end in the Bears' defensive scheme and was part of a Baylor defense that allowed the fewest points per contest (19.8) in the Big 12. 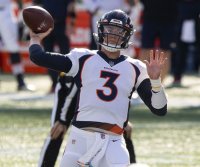