Kansas City Chiefs tight end Travis Kelce (87) spikes the ball after scoring a touchdown against the Houston Texans during the AFC Divisional Round on Sunday at Arrowhead Stadium in Kansas City, Missouri. Photo by Kyle Rivas/UPI | License Photo

Jan. 12 (UPI) -- Patrick Mahomes and the Kansas City Chiefs roared back from a 24-point deficit to beat the Houston Texans 51-31 in Sunday's AFC divisional round game at Arrowhead Stadium.

Mahomes and the high-flying Chiefs reeled off 41 consecutive points to reach the AFC Championship Game. It was the most unanswered points in a postseason game since the New York Jets posted 41 against the Indianapolis Colts in the 2002 wild-card round.

Kansas City will play the Tennessee Titans next Sunday for a trip to the Super Bowl in Miami. The No. 6 seed Titans stunned Lamar Jackson and the top-seeded Baltimore Ravens on Saturday night.

Mahomes completed 23-of-35 passes for 321 yards and five touchdowns. He also led the Chiefs with 53 rushing yards on seven carries.

The Texans jumped out to a 21-0 lead in the first quarter after a series of miscues by the Chiefs. Deshaun Watson connected with receiver Kenny Stills for an easy 54-yard touchdown after a blown assignment by Kansas City's defense.

From that point forward, the Chiefs' offense revved up and rattled off 28 unanswered points to take a 28-24 halftime lead. Mahomes closed the first half with four touchdown passes, including three scoring strikes to Kelce in a span of about eight minutes.

The Chiefs continued their offensive outburst in the third quarter with two touchdown runs from Williams. His 5-yard scoring run, his third of the game, gave Kansas City a 41-24 advantage late in the third frame.

Watson scored the Texans' first touchdown since the first quarter on a 5-yard run with 24 seconds left in the third quarter to make it a 10-point game. Mahomes responded with his fifth touchdown pass of the contest early in the fourth quarter and Harrison Butker drilled a 24-yard kick to punch the Chiefs' ticket to the AFC title game.

Watson completed 31-of-52 throws for 388 yards and two touchdowns. He added six carries for 37 yards and one rushing score.

NFL // 10 hours ago
Packers' Davante Adams put on COVID-19 list; Bears' Matt Nagy positive for virus
Oct. 25 (UPI) -- The Green Bay Packers could be without Davante Adams for Thursday night's showdown against the Arizona Cardinals after the star wide receiver was placed on the reserve/COVID-19 list Monday. 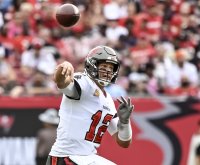 NFL // 15 hours ago
Fan's surrendered ball from Brady's 600th TD pass worth up to $1M
MIAMI, Oct. 25 (UPI) -- The football from Tom Brady's 600th career touchdown pass, given to a fan and returned to the Tampa Bay Buccaneers quarterback, is worth between $500,000 and $1 million, several auction houses said.