Former Miami Dolphins head coach Jimmy Johnson (L) was surprised with the Hall of Fame announcement during Fox Sports' halftime show of the divisional round game between the Packers and Seahawks on Sunday. File Photo by UPI | License Photo

Pro Football Hall of Fame president David Baker made the announcement to Johnson during Fox Sports' halftime show of the NFC divisional round matchup between the Green Bay Packers and Seattle Seahawks on Sunday night.

Johnson was emotional upon receiving the surprising news, as was his former quarterback Troy Aikman, who was seen tearing up as he heard the segment from the broadcast booth in Green Bay.

"The only thing I can think of is all of the assistant coaches that worked for me, all the great players that played for me, they're the reason I'm here," Johnson said. "I can't talk. This is so special to me, because when you've put in the work that we put in it's nice to know people appreciate it."

Legendary @dallascowboys coach @JimmyJohnson finds out live on TV he is the newest member of the Pro Football Hall of Fame! pic.twitter.com/GK3jlSlWRz— FOX Sports (@FOXSports) January 13, 2020

Johnson, who currently serves as an NFL analyst for Fox, won two Super Bowls with the Cowboys and helped construct the bulk of the roster that won a third championship for Dallas after his departure.

The Hall of Fame's 2020 class was chosen by a blue-ribbon panel last week. The remainder of the 15-member class will be unveiled Wednesday.

Baker announced Saturday that former Pittsburgh Steelers head coach Bill Cowher also would be enshrined in the Hall of Fame. 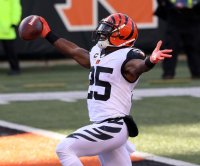