Ezekiel Elliott (21) and the Dallas Cowboys are currently out of the NFC East playoff picture, but can claim the NFC East title and a postseason spot if they win and the Philadelphia Eagles lose in Week 17. Photo by Ian Halperin/UPI | License Photo

Tom Brady (12) and the New England Patriots clinched the AFC East with a win against the Buffalo Bills in Week 16. Photo by Matthew Healey/UPI | License Photo

Dec. 24 (UPI) -- Two spots still are up for grabs in the 2019 NFL playoffs, while several teams will jockey for home field advantage and first-round byes entering the final week of the regular season.

NFL MVP candidate Lamar Jackson has led the Baltimore Ravens to the No. 1 seed in the AFC. The Ravens have clinched a first-round bye and home field advantage throughout the postseason and have nothing to play for in Week 17. Jackson and several key players will sit out in Week 17 to avoid injury.

The New England Patriots sit as the No. 2 seed in the AFC, but can lose their first-round bye if they fall to the Miami Dolphins and the Kansas City Chiefs beat the Los Angeles Chargers in Week 17.

The Ravens won the AFC North, while the Patriots won the AFC East. The Houston Texans -- the AFC South champions -- are the No. 4 seed entering Week 17. The Chiefs won the AFC West and are currently the No. 3 seed in the AFC.

RELATED Marshawn Lynch out of retirement for second stint with Seahawks

The Buffalo Bills have clinched a Wild Card spot in the AFC playoff picture. The Tennessee Titans hold the final Wild Card spot, but can still miss the playoffs if several scenarios unfold.

No team has clinched a first-round bye in the NFC.

The Green Bay Packers and New Orleans Saints are the only NFC teams with division titles entering Week 17. The Seattle Seahawks and San Francisco 49ers have clinched spots in the postseason, but will face-off Sunday for the NFC West title. The Philadelphia Eagles lead the NFC East and currently hold the No. 4 seed entering Week 17, but still could miss the playoffs.

The Minnesota Vikings have clinched a Wild Card spot and hold the No. 6 seed entering Sunday's slate of games.

What they need to do

NFL // 6 hours ago
Tom Brady not talking with Patriots, open to joining other teams
Feb. 27 (UPI) -- Tom Brady's historic run with the New England Patriots could be coming to an end, as the franchise has yet to offer the star quarterback a contract extension. 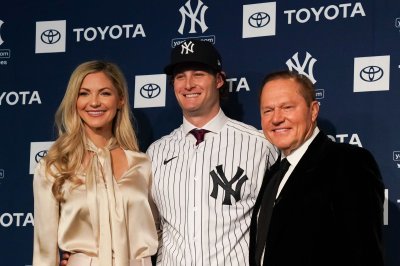