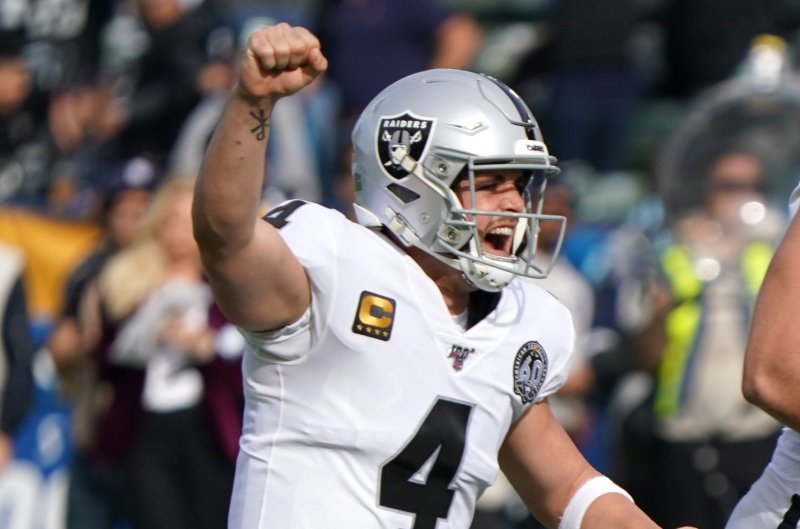 Dec. 22 (UPI) -- The Oakland Raiders kept their faint playoff hopes alive with a 24-17 win over Philip Rivers and the Los Angeles Chargers on Sunday at Dignity Health Sports Park in Carson, Calif.

The Raiders (7-8) entered Sunday with small odds to earn the final wild-card spot in the AFC, but losses by the Pittsburgh Steelers and Tennessee Titans have opened the door for Oakland.

To grab the final spot in the playoffs, the Raiders need a win over the Denver Broncos next Sunday, along with losses by the Titans (at Houston Texans), Steelers (at Baltimore Ravens) and Jacksonville Jaguars (vs. Indianapolis Colts).

The Raiders, who have reached the postseason only once since 2003, were led by quarterback Derek Carr against the Chargers. He completed 26-of-30 passes for 291 yards and a touchdown, with his 86.7 percent completion rate being his second highest in a single game.

Oakland grabbed control with a 56-yard touchdown pass from Carr to receiver Hunter Renfrow early in the first quarter. Chargers running back Melvin Gordon equalized the score 7-7 late in the second frame with a 1-yard touchdown run.

Carr gave the Raiders a 14-7 lead at halftime when he scampered in from three yards out. It marked his first rushing score since a Week 11 win over the Cincinnati Bengals.

Raiders backup tailback DeAndre Washington, starting in place of the injured Josh Jacobs, extended Oakland's lead to 21-7 midway through the third quarter with a 5-yard touchdown run. Gordon's second rushing score of the game cut the Chargers' deficit to 21-14 with 1:04 remaining in the third.

Daniel Carlson made it a two-possession game after connecting on a 48-yard field goal with 8:28 left in the fourth quarter. Chargers kicker Michael Badgley converted a 27-yard kick with 1:29 remaining to make it 24-17, but Los Angeles was unable to recover the ensuing onside kick.

Rivers completed 27-of-39 passes for 279 yards with no touchdowns or interceptions. The Chargers' rushing attack combined for 19 yards and two scores on 16 total carries.

The Chargers (5-10) will play the Kansas City Chiefs in their regular-season finale next Sunday.