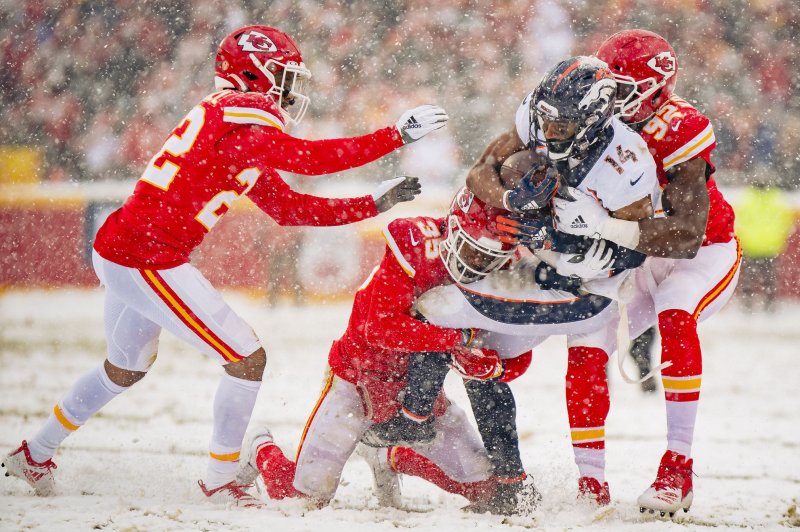 Dec. 20 (UPI) -- We have reached championship week in most fantasy football leagues. Congratulations to you if you were able to guide your team into your league's title game.

While you likely have a loaded roster, you still have to decide who to sit and who to start in Week 16, in order to beat your final opponent.

Shy away from players who are facing tough defenses, but only if you are deciding between two players with similar skill levels and opportunities in their respective offenses.

RELATED Panthers to start rookie QB Will Grier vs. Colts

Houston Texans star DeAndre Hopkins has been brilliant lately, going off for 100 yards in back-to-back games entering his Week 16 matchup against the Tampa Bay Buccaneers. Hopkins is my top wide receiver this week. The Buccaneers are allowing the most fantasy points per game to wide receivers. They have also allowed a league-high 2,833 yards to the position. I'm expecting Hopkins to post at least 100 yards and score a touchdown in Week 16.

Davante Adams is my No. 2 wide receiver for Week 16. The Green Bay Packers star has scored in three of his last four games. He went off for 103 yards and a score in Week 15. This week the Packers face the Minnesota Vikings, a unit tied for allowing the ninth-most fantasy points per game to wide receivers. Adams should give you a huge advantage in your league's championship.

Dallas Cowboys playmaker Amari Cooper is my No. 5 option for Week 16. Cooper only had one catch for 19 yards in Week 15, but should be much more involved in the team's Week 16 clash against the Philadelphia Eagles. The Eagles are allowing the second-most fantasy points per game to wide receivers. Cooper is an elite option for Week 16.

Tyler Lockett has been Russell Wilson's top option this season as the Seattle Seahawks quarterback has put himself into MVP consideration. Lockett is my No. 10 wide receiver this week. The Seahawks are set to face the Arizona Cardinals, a unit that has allowed the fifth-most receiving yards to wide receivers in 2019. Lockett had 120 yards and a score in Week 15. He should post another WR1 day against this beatable secondary.

Indianapolis Colts wide receiver T.Y. Hilton is my No. 22 option for Week 16, landing in WR2 territory. Hilton returned to the Colts' lineup in Week 15 after a two week absence. He only had four catches for 25 yards in the Colts' loss to the New Orleans Saints. This week the Colts face the Carolina Panthers, a unit that has allowed the third-most receiving yards to the position. I'm expecting more than 100 receiving yards from Hilton in this matchup. He also has a chance to break loose for a big play.

Denver Broncos wide receiver Courtland Sutton is my No. 25 option for Week 16, landing in low-end WR2 or high-end WR3 territory. Sutton has just two games with at least 100 yards this season, but I'm expecting this to be his third. The Broncos are set to face the Detroit Lions, a unit that has allowed the second-most receiving yards and is allowing the sixth-most fantasy points per game to wide receivers. Sutton should come up strong for you in the championship. He could put you over the top in Week 16 if he gets into the end zone.

13. Will Fuller, Houston Texans at TB

NFL // 1 hour ago
49ers 'content' with QBs Purdy, Lance; won't re-sign Garoppolo, coach says
Feb. 2 (UPI) -- The San Francisco 49ers are "content" with Brock Purdy and Trey Lance as the top quarterbacks on their roster and will not bring back Jimmy Garoppolo next season, coach Kyle Shanahan told reporters.

NFL // 2 days ago
Bengals' Pratt regrets yelling at teammate Ossai for penalty vs. Chiefs
Jan. 31 (UPI) -- Linebacker Germaine Pratt told reporters that he was "wrong" for screaming at teammate Joseph Ossai for the role his penalty played in the Cincinnati Bengals' loss to the Kansas City Chiefs in the AFC title game.

NFL // 3 days ago
Chiefs' repeat third down vs. Bengals prompted by game clock error, referee says
Jan. 30 (UPI) -- A clock operator failed to stop the time late in the Kansas City Chiefs' AFC title game win over the Cincinnati Bengals, which led to a highly criticized decision to replay a third down, referee Ron Torbert said.