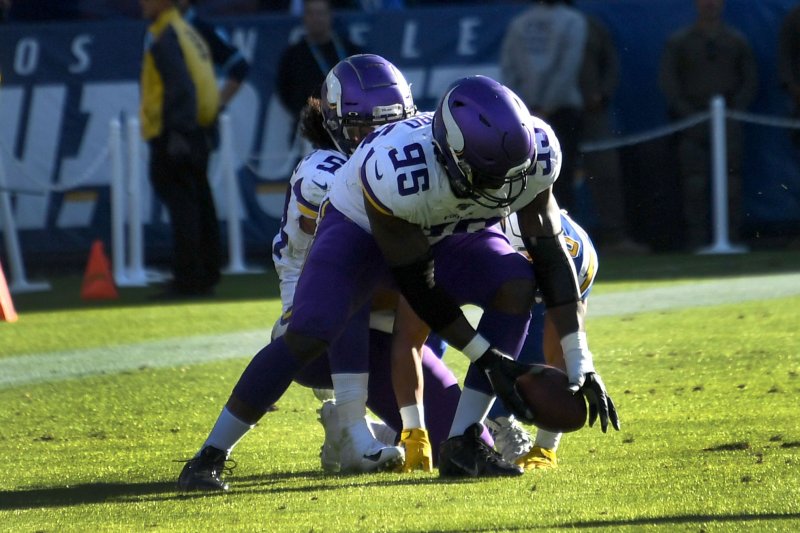 Minnesota Vikings running back Dalvin Cook (33) sustained a shoulder injury in the third quarter and did not return to the game during his team's win against the Los Angeles Chargers Sunday in Carson, Calif. Photo by Jon SooHoo/UPI | License Photo

Minnesota moved to 10-4 on the season with the 39-10 win Sunday at Dignity Health Sports Park in Carson, Calif. The Vikings are still battling for a playoff berth, while the Green Bay Packers have already clinched a postseason spot and sit atop the NFC North heading into their Week 16 division matchup.

Defensive end Danielle Hunter had two forced fumbles, a fumble recovery and a sack to lead the Vikings defense in Sunday's lopsided triumph.

"It's still all up for grabs," Vikings quarterback Kirk Cousins said of the team's playoff hopes. "We've got to finish strong. It's a two-game season now, and with the way we've played the first four teams, we've put our self in a position to have a lot to play for these last two games.

Rivers tossed a two-yard score to Mike Williams to cap off the 10-play, 75-yard scoring drive. The Vikings snatched the lead back with a 44-yard Dan Bailey field goal on the next drive.

Harrison Smith intercepted Rivers on the Chargers' next drive, before Rivers fumbled on the Chargers' following possession. Hunter sacked Rivers at the start of that sequence, forcing the fumble. Ifeadi Odenigbo recovered the fumble and scored on a 56-yard return, giving the Chargers a 19-10 lead at halftime.

Chargers running back Melvin Gordon fumbled on the first drive of the second half, giving the Vikings the ball at the Los Angeles 26-yard line. Bailey made a 38-yard field goal five plays later, extending the Vikings' lead to 22-10. Bailey added a 27-yard kick on the Vikings' next possession.

Mike Boone scored an eight-yard rushing touchdown on the Vikings' next drive, before adding another rushing score with 8:48 remaining, following another Chargers fumble.

Rivers was intercepted on each of the Chargers' final two drives of the game.

Smith, Anthony Harris and Mike Hughes each had interceptions for Minnesota. Shamar Stephen, Eric Hendricks and Trae Waynes also had forced fumbles in the win. Waynes also had a fumble recovery.

Gordon had 28 yards on seven carries and lost two fumbles in the loss. Rivers completed 28 of 39 passes for 307 yards and one score, in addition to his four turnovers.

"We made too many mistakes and we do that against what's now a 10-win team, usually doesn't go over well," Rivers said. "We put our defense in a tough spot, but they hung in there. Eventually mistakes just kind of snowballed out of control and they pulled away from us."

Cousins completed 19 of 25 passes for 207 yards, one score and one interception. Vikings running back Dalvin Cook injured his shoulder at the start of the second half and did not return to the game.

The Vikings host the Packers at 8:15 p.m. EST Monday, Dec. 23 at U.S. Bank Stadium in Minneapolis. The Chargers host the Oakland Raiders at 4:05 p.m. EST Sunday in Carson.

"We need them [wins] all now, If you're going to do what you got to do, you need to go win games," Vikings coach Mike Zimmer said. "But I will say this about this team, it's not easy to win 10 games in this league.

"For us to go out and get our tenth win, and still have a couple of opportunities to get a couple more, that's big. We have a bunch of fighters. I appreciate the way they work."