Kansas City Chiefs quarterback Patrick Mahomes (15) threw one touchdown and one interception in a win against the New England Patriots Sunday in Foxborough, Mass. Photo by Matthew Healey/UPI | License Photo

New England Patriots quarterback Tom Brady (12) threw one touchdown and one interception in a loss to the Kansas City Chiefs Sunday in Foxborough, Mass. Photo by Matthew Healey/UPI | License Photo

New England Patriots and Kansas City Chiefs clash at the line in the second quarter at Gillette Stadium in Foxborough, Mass., on Sunday. The Chiefs defeated the Patriots 23-16. Photo by Matthew Healey/UPI | License Photo

"We've just got to go out and try to play better and try to win next week's game," the Patriots quarterback told reporters. "Disappointing, but not going to feel sorry for ourselves. [We'll] try to go back to work and do a better job."

The Patriots began the game with a five-play, 83-yard scoring drive. Brady connected with veteran wide receiver Julian Edelman for a 37-yard touchdown to end the opening drive with a score.

The Chiefs got on the board with a 48-yard field goal from Harrison Butker. Kansas City took a 10-7 lead when Patrick Mahomes connected with Mecole Hardman on a 48-yard touchdown pass at the start of the second quarter.

Chiefs tight end Travis Kelce had a four-yard rushing touchdown on Kansas City's next drive, pushing the lead to 17-7. Butker hit a 31-yard field goal just before the half to give the Chiefs a 20-7 edge at the break.

Butker made another field goal on the first drive of the second half before the Patriots began their rally.

Patriots star special teamer Nate Ebner blocked a Chiefs punt to give his team the ball on the Kansas City 19-yard line. The Patriots scored two plays later when Brandon Bolden rushed for a 10-yard touchdown.

The Chiefs fumbled on their next drive, leading to a 29-yard Nick Folk field goal for the final points of the game with 11:42 remaining.

Mahomes played through a hand injury to lead the Chiefs to the victory, completing 26 of 40 passes for 283 yards, one score and one interception.

Brady completed 19 of 36 passes for 169 yards, one touchdown and one interception in the loss. Edelman hauled in eight catches for 95 yards and a score for the Patriots.

"This team is building every single week," Mahomes said. "The defense is getting better. The offense is still rolling and doing good things. It's part of the process. It's day by day.

"Obviously we wanted to get this game and win the AFC West, but we're still going and that's how we are going to keep rolling for the rest of the season and into the playoffs."

The Patriots next face the Cincinnati Bengals at Paul Brown Stadium in Cincinnati and the Chiefs host the Denver Broncos at Arrowhead Stadium Kansas City. Both games kick off at 1 p.m. EST Sunday. 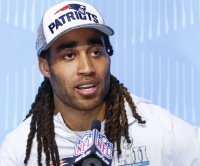