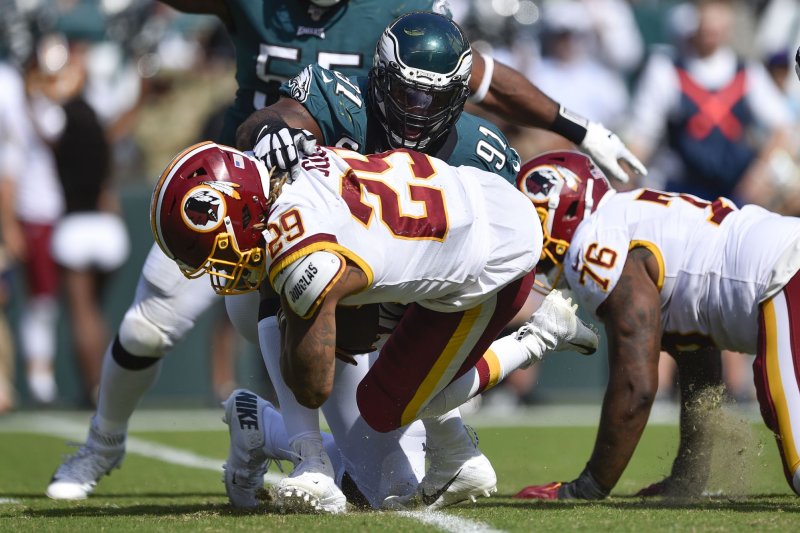 Washington Redskins running back Derrius Guice (29) will undergo an MRI Monday to determine the severity of his knee injury. File Photo by Derik Hamilton/UPI | License Photo

Dec. 8 (UPI) -- Washington Redskins running back Derrius Guice was forced out of Sunday's game against the Green Bay Packers because of another knee injury.

League sources told ESPN and NFL Media that Guice will undergo an MRI Monday to determine the severity of the injury. According to NFL Media, the second-year tailback is believed to have suffered an MCL sprain.

Guice sustained the knee injury after a 23-yard run in the second quarter. Packers safety Darnell Savage hit him in the legs as Guice fell to the ground.

Guice remained down on the field as the team's medical staff attended to him. He was eventually helped up and walked off under his own power.

The trainers evaluated Guice in the blue medical tent for several minutes. After exiting the tent, he stood on the sideline away from teammates and was subsequently ruled out for the remainder of the game.

Guice ran for 129 yards and two touchdowns against the Carolina Panthers last week. In Sunday's 20-15 loss to the Packers, he tallied 42 yards on five carries, including 41 on his last four rushes.

Guice missed all of his rookie season after he tore his left ACL in the Redskins' first preseason game in 2018. In the season opener this year, he suffered a torn meniscus in his right knee and missed eight games.

Since returning from the injury in Week 11, Guice has rushed for 245 yards and scored three touchdowns in five games (one start).