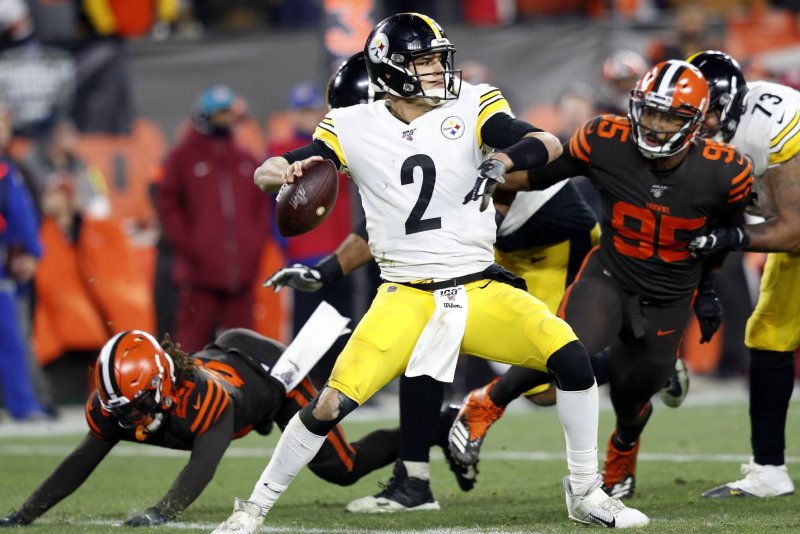 Nov. 15 (UPI) -- The Cleveland Browns defense forced four turnovers, had four sacks and only allowed the Pittsburgh Steelers to convert 18 percent of their third down opportunities in a Thursday Night Football victory.

Joe Schobert intercepted Steelers quarterback Mason Rudolph twice in the 21-7 win Thursday at FirstEnergy Stadium in Cleveland. The AFC North triumph helped the Browns improve to 4-6, while dropping the Steelers to 5-5.

"It's 2-0 in the division," Schobert told reporters. "It is two wins in a row since [Browns coach] Freddie [Kitchens] instilled the 1-0 playoff mentality that we have because of the way we started the season off.

"You just keep stacking blocks. We have taken steps in the right direction, winning the takeaway battle a couple of weeks in a row, which is huge leading to those wins. We just have to keep building on it."

Browns quarterback Baker Mayfield completed 17 of 32 passes for 193 yards, threw two scores and no interceptions. Running back Nick Chubb had 27 carries for 92 yards from the Browns. Morgan Burnett and Juston Burris also picked off Rudolph. Schobert, Burris, Chad Thomas and Larry Ogunjobi each had sacks in the win and Burris forced a fumble.

"I'm concerned, but we didn't get it done, and that's my level of concern," Steelers head coach Mike Tomlin said. "It doesn't carry over into the upcoming weeks and things of that nature. We'll evaluate this. We'll assess who's available to us and plot a course to move forward."

Rudolph threw a three-yard touchdown pass to Jaylen Samuels with 5:45 remaining in the third quarter to make the score 14-7. The Browns scored the final touchdown of the game after intercepting Rudolph for a third time. Schobert picked off the Steelers quarterback with 6:32 remaining and returned the interception 20 yards to the Pittsburgh four-yard line. The Browns scored three plays later, with Mayfield connecting with Stephen Carlson on an eight-yard touchdown toss.

The Browns next host the Miami Dolphins at 1 p.m. EST on Nov. 24 and the Steelers battle the Cincinnati Bengals in another AFC North matchup at 1 p.m. on Nov. 24 at Paul Brown Stadium in Cincinnati.

"We have plenty of games to get back into this thing. We will get prepared for Cincinnati just like any other week. We will continue to move on, watch the tape and go through the critical analysis," Rudolph said.

NFL // 2 weeks ago
Bucs' Rob Gronkowski retires, leaves door open for NFL return
June 22 (UPI) -- Tampa Bay Buccaneers tight end Rob Gronkowski retired from the NFL for a second time, he announced on social media. His agent later said he "wouldn't be surprised" if he came back in the middle of next season or in 2023.