If you don't have a top quarterback option, take a look at my weekly waiver wire article. There are several capable gunslingers with great matchups who should be on your streaming radar.

Dallas Cowboys star Dak Prescott is my No. 1 quarterback for Week 11. Prescott has thrown three touchdown passes in back to back games entering his Week 11 matchup against the Detroit Lions, a unit allowing the sixth-most fantasy points per game to quarterbacks. The Cowboys gunslinger remains an elite QB1 going forward. I expect Prescott to light up the Lions, while frequently targeting star wide receiver Amari Cooper. He should have at least three touchdown passes in this matchup.

New Orleans Saints veteran Drew Brees is my No. 2 quarterback for Week 11. The Saints are set to face the Tampa Bay Buccaneers, a unit allowing the second-most fantasy points per game to quarterbacks.

The Buccaneers can likely stop the Saints running game with solid defensive line play, but I expect Brees to gash them through the air. Brees failed to throw a touchdown in Week 10, but should rebound in a big way this week. I'm expecting at least 300 passing yards and three touchdowns from the Saints star.

Buffalo Bills quarterback Josh Allen is having a solid season from a fantasy football perspective. He comes in as my No. 6 option for Week 11 with a matchup against the Miami Dolphins, a unit allowing the seventh-most fantasy points per game to quarterbacks.

Allen has maintained relevance in fantasy football even when he hasn't had great passing performances, due his running ability. He should go off against the Dolphins, throwing for multiple touchdowns and putting up a solid rushing yard total. Start Allen down the stretch, especially in matchups like this one.

Oakland Raiders quarterback Derek Carr has a 14-to-4 touchdown to interception ratio this season. He has also thrown multiple touchdown passes in five of his nine games this season. I'm expecting another day with at least two touchdown tosses for Carr against the Cincinnati Bengals, a unit allowing the third-most fantasy points to quarterbacks. Carr is my No. 10 option this week and is a great bye week fill in.

San Francisco 49ers quarterback Jimmy Garoppolo is my No. 11 option for Week 11, landing in QB1 territory in deeper leagues. Garoppolo had back to back games with multiple touchdown passes entering Week 10, but threw just one score last week against the Seattle Seahawks. I expect a rebound from Garoppolo in Week 11 against the Arizona Cardinals, a unit that has allowed the most passing yards, touchdowns and fantasy points per game to quarterbacks. The 49ers should dominate this game after suffering their first loss of the season in Week 10.

Carolina Panthers quarterback Kyle Allen is a borderline QB1 for Week 11, based on his matchup against the Atlanta Falcons. I would start Allen if you are in need of a bye week fill in. The Falcons are allowing the fourth-most fantasy points per game to quarterbacks. Allen had a season-high 307 passing yards in Week 10. I expect Allen to air it out again this week and post at least 250 passing yards and throw multiple touchdown passes against the Falcons. Allen is my No. 13 quarterback. 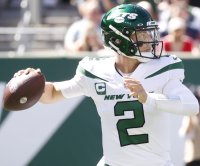 NFL // 3 hours ago
Jets QB Zach Wilson leaves Week 7 game with knee injury
Oct. 24 (UPI) -- Rookie quarterback Zach Wilson sustained a right knee injury in the second quarter of the New York Jets' loss to the New England Patriots on Sunday in Foxborough, Mass., and did not return to the game. 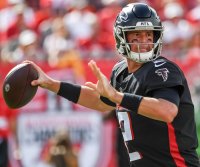 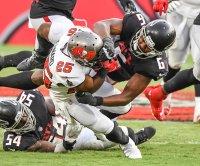 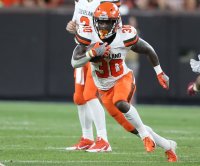