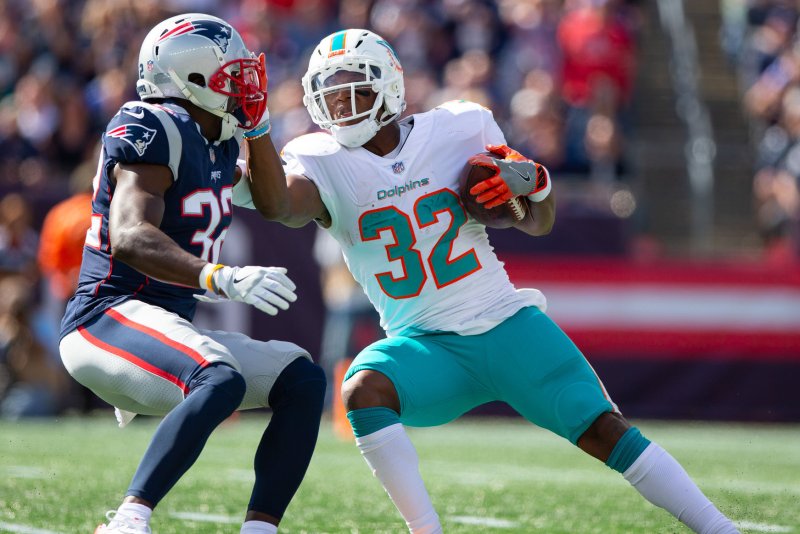 Miami Dolphins running back Kenyan Drake (32) has been the subject of trade talks this season. File Photo by Matthew Healey/UPI | License Photo

Oct. 28 (UPI) -- The Miami Dolphins will be without running back Kenyan Drake for Monday night's matchup against the Pittsburgh Steelers.

League sources told ESPN and NFL Media on Sunday that Drake didn't travel with the team for their game against the Steelers on Monday Night Football for non-injury reasons.

Over the course of the season, first-year head coach Brian Flores and the Dolphins (0-6) have flipped younger players for future draft picks. Drake has been the subject of multiple trade rumors throughout the season.

Drake has had a lackluster 2019 campaign after accounting for over 1,000 yards from scrimmage and nine total touchdowns last season. The fourth-year tailback has failed to cross the 50-yard mark on the ground in a game this season and has been unable to break out as a receiving threat out of the backfield.

Through six games (two starts) this season, Drake has 174 rushing yards on 47 carries and 22 receptions for 174 receiving yards. He has failed to record a touchdown this year and has two fumbles.

The winless Dolphins will play the Steelers on Monday night before hosting the New York Jets next week.