Jacksonville Jaguars running back Leonard Fournette (R) ranks third in the NFL with 584 rushing yards this season. He is averaging 5.1 yards per carry. Photo by Joe Marino/UPI | License Photo

You also should remove Cleveland Browns, Pittsburgh Steelers, Carolina Panthers and Tampa Bay Buccaneers players from your lineup, as those teams have Week 7 byes.

Jacksonville Jaguars star Leonard Fournette tops my Week 7 running back rankings for several reasons. The Jaguars face the Cincinnati Bengals, a unit allowing the most fantasy points per game to running backs. Fournette is also being heavily leaned on this season. The recipe of workload and opportunity is too good to pass up this week for Fournette. He is an elite option in this matchup. Fournette had at least 20 carries in each of his last three games. He was held to 72 rushing yards in Week 6, but should break out for more than 100 yards in Week 7 against this beatable defense.

Tennessee Titans running back Derrick Henry has also been a workhorse this season. Henry is my No. 6 running back for Week 7 as he takes on the Los Angeles Chargers, a unit allowing the eighth-most fantasy points per game to running backs. Henry only has one performance with at least 100 rushing yards this season, but the Titans have had the most success as a team when Henry is a large part of the offense. Henry should be even more involved this week after the team switched to quarterback Ryan Tannehill. Keep this RB1 in your lineup.

The San Francisco 49ers are loaded at the running back position and Tevin Coleman might be there best weapon. I have Coleman as my No. 10 running back for Week 7, landing in RB2 territory. The 49ers should dominate the Washington Redskins and Coleman will likely have a huge role. The Redskins are allowing the seventh-most fantasy points per game to running backs. Coleman had 97 yards and a score in his return from injury in Week 5. He had another score in Week 6. Start Coleman with confidence, especially in point-per-reception formats.

Veteran Frank Gore has been surprisingly productive this season. This week he faces the Miami Dolphins, a unit allowing the second-most fantasy points per game to running backs. I have the Buffalo Bills running back at No. 14 at the position in my weekly rankings. Gore is a solid bye week fill in option and a matchup-dependent RB2 going forward. While this is a great matchup, Gore's production could have a ceiling if the Bills have rookie Devin Singletary active for this matchup. But I still expect starter-worthy production, regardless of Singletary's status.

23. David Montgomery, Chicago Bears vs. NO

NFL // 1 hour ago
XFL suspends operations, lays off employees
April 10 (UPI) -- The XFL suspended operations and laid off nearly all of their employees Friday amid the coronavirus pandemic. 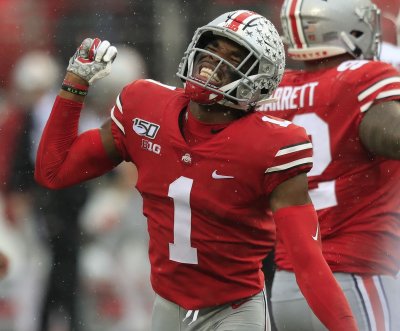 NFL // 6 hours ago
NFL Draft: 58 prospects to participate in virtual event
April 10 (UPI) -- Nearly 60 prospects will participate virtually in the 2020 NFL Draft after the main event was closed to the public due to the coronavirus pandemic.

NFL // 1 day ago
Vernon Davis latest sports star turning to Hollywood
April 9 (UPI) -- Vernon Davis shed his shoulder pads this off-season when retiring from the NFL. Now he is one of the latest star athlete's to shift his focus toward a career in Hollywood.