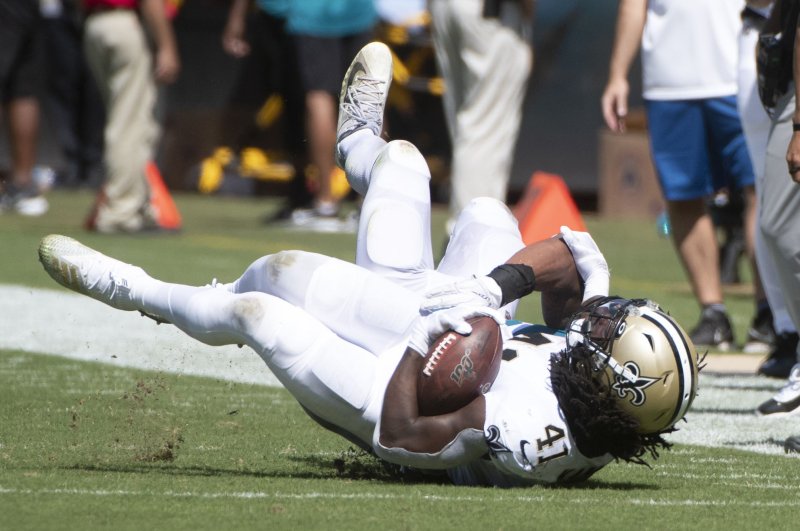 New Orleans Saints running back Alvin Kamara has 373 yards and one score on 86 carries this season. He also has 276 yards and a score on 33 receptions. Photo by Joe Marino/UPI | License Photo

Kamara had a swollen ankle heading into the Saints' Week 6 win against the Jacksonville Jaguars. Saints coach Sean Payton said the star running back "tweaked his knee" during the victory.

Sources told NFL Network Kamara is now dealing with a "high ankle-type issue" and will be limited in practice this week. Kamara was injured in the first quarter of the Saints' Week 6 win. He still has a chance to play Sunday.

The Saints star played for 59 percent of the Saints' offensive plays in Week 6, despite being hobbled. Backup running back Latavius Murray had 79 yards on 11 touches in the win.

"I think it's just one of those things where, if you continue to prepare as if you're the starter, as if you're going to be the guy who is going to get the carries and get the rock, if you prepare that way every week, there shouldn't be any surprise, regardless of what happens," Murray said after Sunday's win.

"I try to keep that same mentality regardless, but obviously today, I was thrown into the mix a little more. I think that's just a part of the game, me being ready."

If Kamara doesn't play in Week 7, Murray will be much more useful as an RB2. Neither player is likely to have a great day against the Chicago Bears, who boast one of the league's top rush defenses. The Bears are allowing 83 rushing yards per game, the fifth-fewest total in the NFL.

Kamara has yet to eclipse 100 rushing yards in a game this season and has just one rushing score. He has gone over 100 yards from scrimmage in three of his six starts this season. If you are a Kamara owner, you need to consider other options heading into the Saints' Week 7 clash.

The Saints face the Bears at 4:25 p.m. EDT Sunday in Chicago, meaning you likely won't know Kamara's status for the game until after the start of the 1 p.m. games. If you don't have a great backup option to slide in for Kamara, take a look at my Week 7 waiver wire article. Chase Edmonds, Jamaal Williams, Benny Snell and Mark Walton are among the players with low ownership percentages that I think you should take a look at for running back help. You could also possibly play a wide receiver at the position, depending on your league's settings.

It is also a very good time to buy low on Kamara, trying to acquire the running back via trade at what could likely be the lowest price possible this season.