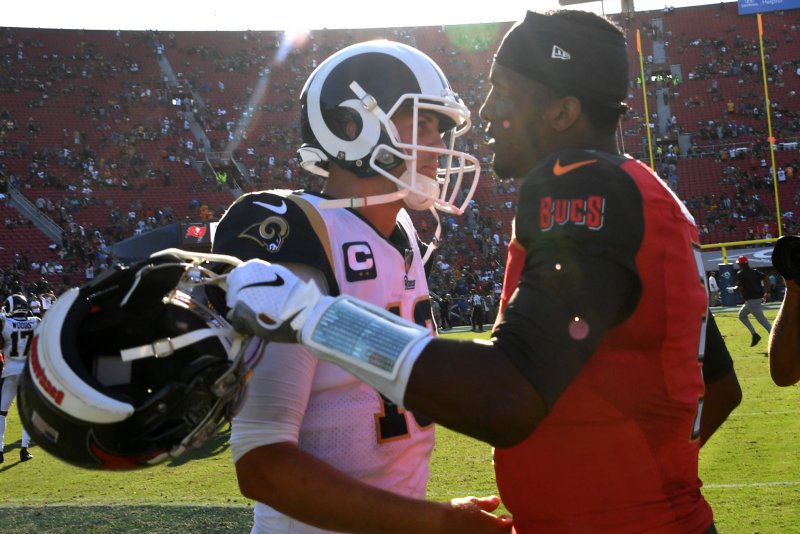 Winston completed 28 of 41 passes in the win. Goff threw for 517 yards in the loss, while completing 45 of 68 throws for two scores and three interceptions. Goff's 68 attempts were the third-most in a single game in NFL history.

"It was very fun," Winston told reporters. "It was fun being in the Coliseum in L.A. up under the lights. Lights, camera, action.

"We're in Hollywood and we had a great game, so we just got to continue to do that."

Chris Godwin fights his way in for his 2nd score of the game! @CGtwelve_ #GoBucs #TBvsLAR

Running back Peyton Barber put the Buccaneers ahead 7-0 with a first quarter rushing score before Winston connected with Chris Godwin on a second quarter passing touchdown. Tampa Bay took a 21-0 lead when Winston found Godwin for a second time on the Buccaneers' next possession.

Todd Gurley put the Rams on the board with a 13-yard scoring run on the next drive. Goff found tight end Gerald Everett for a 5-yard touchdown toss to make the score 21-14 with 2:55 remaining in the first half. Buccaneers running back Ronald Jones scored on a 5-yard run on Tampa Bay's next drive. Rams kicker Greg Zuerlein hit a 58-yard field goal seven seconds before the half to cut the deficit to nine points at the break.

Zuerlein hit another field goal on the Rams' first drive of the second half before Matt Gay answered with a field goal for the Buccaneers. Winston found tight end Cameron Brate for a 13-yard touchdown toss to give Tampa Bay a 38-20 lead at the start of the fourth quarter.

Rams cornerback Marcus Peters made it a one-possession game when he intercepted Winston and scored on a 32-yard return with 8:25 remaining in the game. Gay hit a field goal on the Buccaneers next possession. Bucs defensive tackle Ndamukong Suh then recovered a Goff fumble and returned it for a 37-yard touchdown for the final score of the game with 1:17 remaining.

"I think it's really a wake-up call for everybody," Rams coach Sean McVay said. Ultimately, it's about finding a way to win football games. We didn't do that today, we make no excuses for it and we relish the opportunity to move forward the right way."

Godwin had 172 yards and two scores on 12 catches for the Buccaneers. Robert Woods led the Rams with 164 yards on 13 receptions. Kupp totaled 121 receiving yards and a score on nine catches in the loss. Buccaneers linebacker Shaquil Barrett had three tackles, a sack, a forced fumble and an interception in the win.

The Rams face the Seattle Seahawks at 8:20 p.m. EDT Thursday in Seattle. The Buccaneers face the New Orleans Saints at 1 p.m. EDT Sunday in New Orleans.