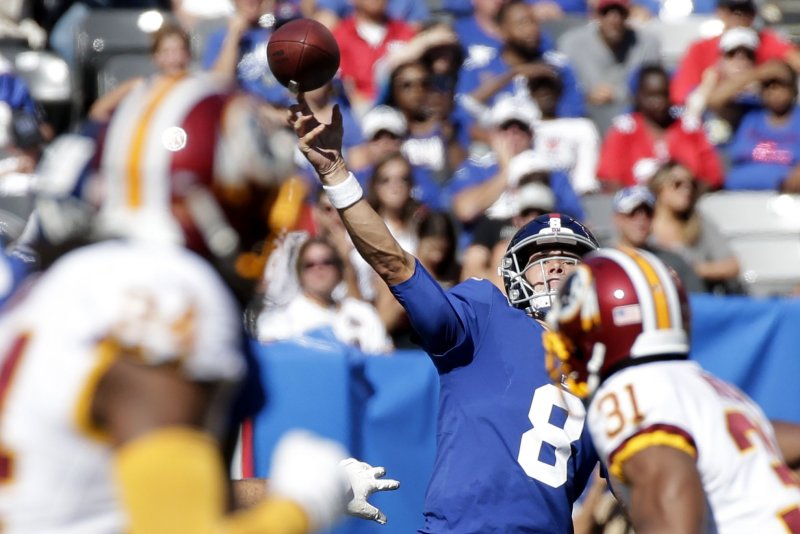 Jones led the Giants (2-2) to a 24-3 triumph in his second career start Sunday at MetLife Stadium in East Rutherford, N.J. He completed 23 of 31 passes for 225 yards, a touchdown and an interception in the win. Jones again showed off his mobility, rushing for 33 yards on five carries.

Haskins entered the game in relief of starter Case Keenum. He completed 6 of 11 passes for 37 yards and an interception for the Redskins (0-4).

"I think it's equally as exciting [as Week 3]," Jones told reporters. "Just to win is always a good feeling, and to win at home is a great feeling. They were definitely two different games, and they played out differently.

"But a win is a win. Like last week, we'll look at it and improve from it. But it's exciting."

Keenum threw his first of three interceptions on the game's opening drive. The Giants scored on the resulting possession, with Jones hitting Wayne Gallman for a 6-yard touchdown. Gallman scored his second touchdown on the Giants' next drive, running in a 1-yard score for a 14-0 advantage.

Jones was intercepted on back-to-back drives before Dustin Hopkins put the Redskins on the board with a 21-yard field goal on Haskins' first drive of the game.

"[Jones] stayed right in the moment," Giants coach Pat Shurmur said. "After those plays, you wouldn't have known that he didn't just throw a touchdown pass. That's part of his charm, he's just onto the next thing. I think that's a credit to him."

Aldrick Rosas hit a 30-yard field goal at the end of the first half, giving the Giants a 17-3 edge. The Giants scored the final touchdown of the game on a 32-yard interception return from Jabrill Peppers at the end of the third quarter.

"I don't wish ill-will on anybody," Haskins said. "I wanted Case [Keenum] to do well. I just knew that my time would be coming and when the day comes, that I'd be ready for it. I didn't execute the way I wanted to but, the good thing about it is that it hurts, and there [are] going to be brighter days tomorrow."

Gallman totaled 118 yards and two scores on 24 touches for the Giants. Keenum completed 9 of 17 passes for 107 yards and three interceptions before being pulled for Haskins. The Giants held the Redskins to 176 total yards and did not allow a sack in the victory.