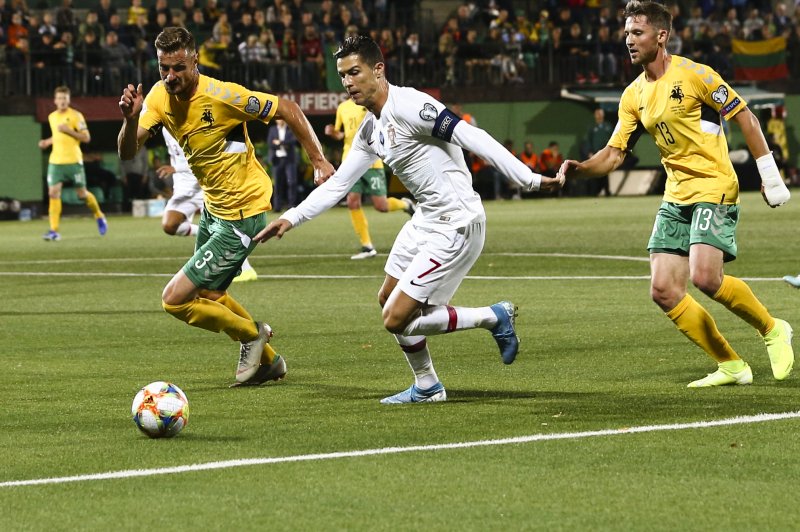 Ronaldo is Europe's all-time top international scorer with 93 goals in 160 games. He scored on a 7th minute penalty kick before netting three goals in the second half of the victory over Lithuania Tuesday at LFF Stadium in Vilnius, Lithuania.

Vytautas Andriuskevicius netted an equalizer for Lithuania with a score in the 28th minute and the score stayed tied through halftime. Ronaldo scored his second goal in the 61st minute.

Rafa Silva slid the ball over to Ronaldo at the top of the box during Portugal's second scoring sequence. Ronaldo stopped the ball before taking on a defender. He put the ball on his right boot before knocking a shot toward the far post. Lithuania keeper Ernestas Setkus initially stopped the shot with his hands, but the ball went over his head and rolled into the net.

Ronaldo scored again about three minutes later. Fellow forward Bernardo Silva lofted in a cross from the right side of the box during that sequence. The ball fell into a charging Ronaldo, who softly volleyed the pass past Setkus for a 3-1 advantage in the 65th minute.

Ronaldo's final score came in the 76th minute. Bernardo Silva received the ball on the right flank during that exchange, before spotting Ronaldo in the left side of the box. Ronaldo received a pass from Silva before ripping a shot back toward the far-post, beating a diving Setkus.