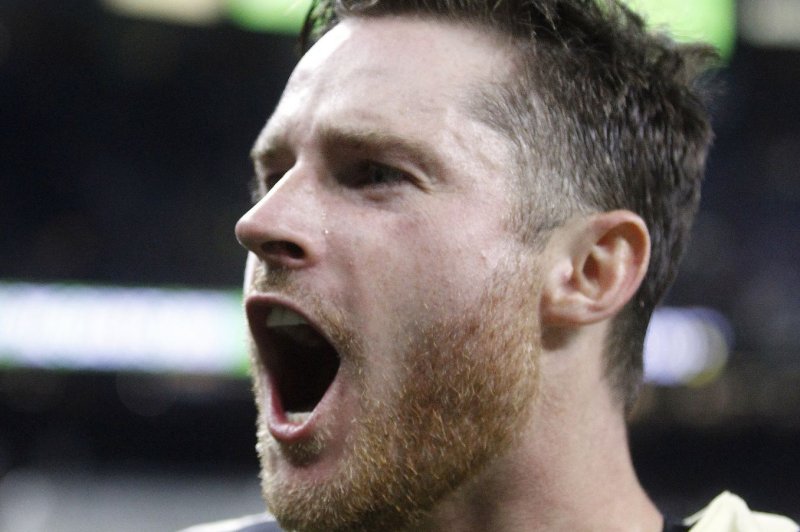 New Orleans Saints kicker Wil Lutz made 3 of 4 field goal attempts, including the game-winner, in a narrow win against the Houston Texans Monday in New Orleans. Photo by AJ Sisco/UPI | License Photo

New Orleans Saints quarterback Drew Brees completed 32 of 43 passes for 370 yards, two touchdowns and an interception in a win against the Houston Texans Monday in New Orleans. Photo by AJ Sisco/UPI | License Photo

Houston Texans quarterback Deshaun Watson completed 20 of 30 passes for 268 yards, three scores and one interception in a win against the New Orleans Saints Monday in New Orleans. Watson also had 40 yards and a score on the ground. Photo by AJ Sisco/UPI | License Photo

Quarterback Deshaun Watson led the Texans down the field for what appeared to be the game-winning touchdown with 43 seconds remaining in the Monday Night Football clash at the New Orleans Superdome, but that left too much time on the clock for Brees.

The Saints star marched the offense from the New Orleans 25-yard line to the Texans' 40 in five plays, getting inside Lutz' range. The kicker stepped up and split the uprights as time expired.

"That's what this game is all about in my opinion," Lutz told reporters. "Not everything is going to go your way. Some things are not going to go as smoothly as you hope and there's going to be ebbs and flows of a football game that you have got to rely on each other to come out of it. I think that shows the resilience of this team. We have done that in the past and tonight we were able do it again."

Brees completed 32 of 43 passes for 370 yards, two touchdowns and an interception in the win. Watson completed 20 of 30 passes for 268 yards, three scores and one interception. Watson also had 40 yards and a score on the ground. Texans star DeAndre Hopkins pulled in eight catches for 111 yards and two scores, and Saints receiver Michael Thomas had 10 catches for 123 yards.

"The minute you heard that ball go off his foot -- it was a thunder kick -- I think we all knew it was going through the uprights," Brees said of Lutz' final field goal.

The Texans and Saints began the game by exchanging punts on their opening drives. Houston also punted on their second drive in the first quarter before Brees tossed an interception in the red zone. The Whitney Mercilus pick-off gave the ball back to Watson. The Texans gunslinger led a 7-play, 104-yard drive, capped off with a 21-yard quarterback keeper for a touchdown.

Lutz hit a 32-yard field goal on the Saints' next drive. Watson hit DeAndre Hopkins on a two-yard touchdown pass to give the Texans a 14-3 edge on the resulting drive. Lutz missed a 56-yard field goal at the end of the first half.

The Saints responded with a 5-play, 83-yard scoring drive on the first possession of the second half. Running back Latavius Murray finished the drive with a 30-yard scoring run. Hopkins caught his second touchdown on the Texans' next drive, snatching a 16-yard toss from Watson.

The Saints closed the gap to 21-17 with an 11-play, 75-yard drive on the next possession. Brees found Taysom Hill with a 9-yard scoring toss on that drive.

Saints safety Marcus Williams intercepted Watson in the red zone on the next drive. The Saints took a 24-21 lead after the turnover, scoring on a 14-yard pass from Brees to Tre'Quan Smith.

Lutz stopped a brief scoring drought with a 47-yard field goal in the fourth quarter, pushing the Saints' lead to six points. The Texans answered with a 2-play, 75-yard scoring drive. New Texans receiver Kenny Stills caught the presumed game-winning score on a 37-yard snag from Watson. The Texans missed the resulting extra point to keep the score tied, but were able to retake the kick after the Saints ran into the kicker.

Brees took over with the Saints trailing by one point. He swiftly put Lutz in range for the game-winning boot.

"It was tough. That is what I just told the team," Texans coach Bill O'Brien said. "We got a good football team in there. We are never out of the game. We have a really good quarterback. We just need to clean some things up and get ready on a short week against a tough team and be ready to go."

The Saints and Texans combined for 924 total yards. New Orleans averaged 7.8 yards per play, while Houston posted 7.0 yards per play. Watson was sacked six times in the loss.

"Obviously, an exciting game," Saints coach Sean Payton said. "One of the challenges early for us after this first game is just a short week, and yet there's so much we need to clean up on from that tape. Being able to get our players in and clean some of those mistakes up before we go on and try to do that in a quick period of time is something that we'll have to do.

"They fought. They hung in there. We ended up, obviously, with a huge kick at the end by Will. It was a good win."