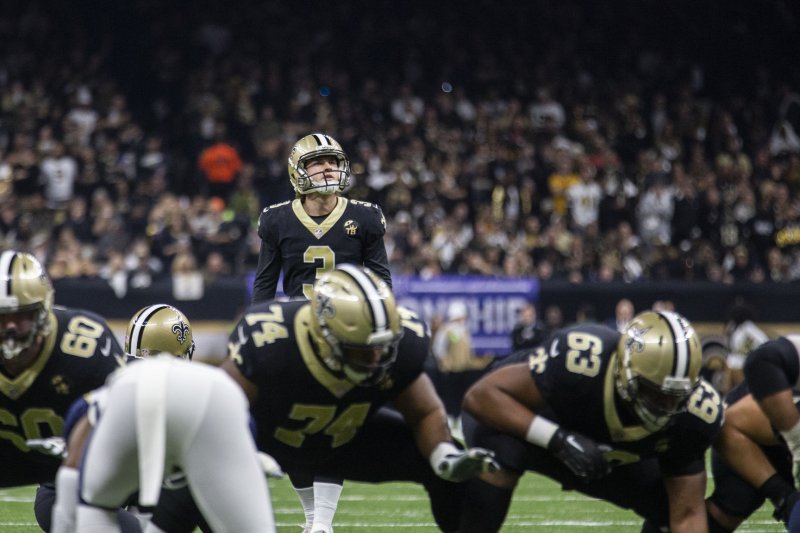 New Orleans Saints kicker Wil Lutz (3) is my No. 1 fantasy football kicker for the 2019 season and for Week 1. File Photo by Mark Wallheiser/UPI | License Photo

Sept. 4 (UPI) -- New Orleans Saints kicker Wil Lutz is my top ranked kicker and the Philadelphia Eagles are my top defense/special teams unit for Week 1 of the 2019 fantasy football season.

I also have Greg Zuerlein, Harrison Butker, Justin Tucker and Stephen Gostkowski among my top-five kicker options for Week 1.

The Seattle Seahawks, Baltimore Ravens, Cleveland Browns and Denver Broncos are among my top-five defense/special teams options to open the season.

If you did not select one of the top kickers in the league in your fantasy football draft, there are still plenty of great streaming options for Week 1.

Lutz is my top kicking option for 2019 and also my top option for Week 1. The New Orleans Saints will host the Houston Texans to open the season. I expect this game to be very high-scoring with Lutz getting at least four shots at extra points, in addition to multiple field goal attempts. He should get double-digit points in this matchup and remain an elite option all season.

The Eagles are my top defense for Week 1 and have a matchup against the Case Keenum-led Washington Redskins. I expect the Eagles to dominate and force the Redskins into playing catch-up in the second half. That should maximize the Eagles' opportunities to use their talented defensive line to generate sacks on Keenum. It should also increase the likelihood of turnovers for the Redskins. The Eagles should be in all lineups in Week 1.

Butker is my No. 3 kicker for Week 1. The Chiefs face the Jacksonville Jaguars on the road to open the season. Despite Jacksonville's poor record in 2018, they still have a very talented defense. While I don't expect the Jaguars to all-out stop the Chiefs' offensive attack, I do expect some stops in the red zone for Jacksonville, leading to Butker field goal opportunities. He should get at least three extra point opportunities and three or more field goal attempts in this matchup.

The Seattle Seahawks will host the Cincinnati Bengals in Week 1. I expect Seattle to dominate, and I have them ranked as my No. 2 defense/special teams unit. Seattle added Jadeveon Clowney this off-season and the Bengals will be without A.J. Green in Week 1. The Bengals had one of the worst defenses in the league last season and will likely have trouble stopping Seahawks defenders from penetrating their weak offensive line. Seattle should be another team who could build an early lead and wreak havoc on Bengals quarterback Andy Dalton.

Lions veteran Matt Prater is my No. 11 kicker for Week 1. Prater and the Lions travel for a game against the Arizona Cardinals. I expect the Lions to have a strong defensive showing in Kyler Murray's first start for Arizona. Detroit might struggle to punch the ball in the end zone on some drives, giving Prater some great opportunities to contribute for your fantasy team. This is a great week to start Prater as a streaming option.

The Broncos are my No. 5 defense/special teams unit for Week 1. I expect Denver to control the game on the ground against the Oakland Raiders, who allowed the third-most rushing yards in the league last season. That tempo should mean a low-scoring game. Denver is a solid streaming option this week among defense/special teams candidates.

6. Jake Elliott, Philadelphia Eagles vs. WAS

13. Ka'imi Fairbairn, Houston Texans at NO

1. Philadelphia Eagles vs. WAS