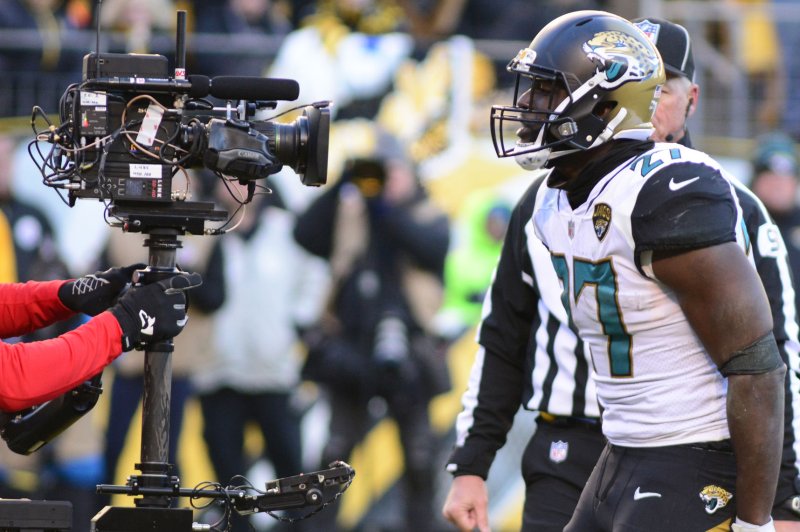 MIAMI, Aug. 26 (UPI) -- Jacksonville Jaguars running back Leonard Fournette says he is "a lot slimmer" and in a better place mentally entering the 2019 season after cutting negative people out of his life.

Those factors -- in addition to the acquisition of quarterback Nick Foles -- should have a very positive impact on Fournette's production in real life and in fantasy football this season.

The bell cow running back broke onto the scene after being selected No. 4 overall in the 2017 NFL Draft. Fournette, 24, followed that 1,040-yard rushing campaign with just 439 yards on the ground last season, while missing eight games due to injuries and a suspension.

Fournette was arrested in April for knowingly driving with a suspended license. He has battled foot ailments for several years and missed several games in 2018 due to a hamstring injury.

The former LSU star met with Jaguars executive vice president Tom Coughlin earlier this year to discuss his future with the team. Now it appears the franchise is on the same page as the star ball-carrier.

Analysts compared him to Bo Jackson entering the 2017 NFL Draft, but now Fournette hinges to goals including health and team success instead of just running over opposing defenders. He weighed in at close to 250 pounds when he reported to training camp as a rookie. Fournette is trying to play at a weight in the 220s in 2019.

"I'm a lot slimmer," Fournette told UPI after the Jaguars' preseason loss to the Miami Dolphins. "I came in more in shape. My mind is better. I'm feeling great overall. I cut the negative people out of my life. I started eating good."

Fournette had 27 yards on seven carries and two catches for 19 yards in his first 2019 preseason showing. He showcased his vision, speed and power multiple times during the performance against the Dolphins. He also showed he has already formed a bond with Foles, who was making his first-ever appearance for the Jaguars.

Jaguars coach Doug Marrone said he is looking forward, not backward, when it comes to assessing Fournette. Marrone also expects big things from Fournette, who has two years remaining on his rookie contract.

"I'm not going to go back a year ago or anything like that," Marrone said. "I just look at how he's been since he reported to camp. He's done everything we've asked him to do. He's taken a ton of reps, he's worked extremely hard. He's been a great finisher in practice. It doesn't surprise me that he went out there and did those types of things.

Fournette had an average draft position in the first round of fantasy football drafts last season, but his perceived value is in the basement entering the 2019 fantasy football season. His current ADP is in the second or third round of 2019 drafts. This is a great spot to take him if he still is available. Fournette still has a shot at top-five production for the running back position.

Fournette said he thinks he will get a bump in receptions in 2019 while catching passes from Foles.

Foles was a much better passer than former Jacksonville Jaguars quarterback Blake Bortles in 2018 when it came to passes thrown shorter than 10 yards. He posted a 122.7 passer rating on passes thrown to his right from the line of scrimmage to 10 yards, compared to Bortles' 79 passer rating.

He also edges Bortles on passes of equal distance to the left side, with an 89 passer rating compared to Bortles' 82.4. Foles posted a 92.9 passer rating for short passes over the middle, while Bortles posted an 85.5.

Fournette averaged 8.4 yards per reception in each of his previous two seasons. He had 302 yards and one score through the air on 36 catches during his rookie campaign and pulled in 22 catches for 185 yards and a score last season.

"Our run game will help this passing game and vice versa," Fournette said. "When [Foles] gets going there is no stopping him. He makes good decisions. He is very accurate. Our job is to protect Nick at all costs ... make sure he doesn't get touched or pressured or anything."

I had Fournette ranked No. 37 overall on my initial fantasy football top 200 player rankings for 2019, but he should be drafted inside the top 30 based on his workload, healthy status and expected increase in receptions. Fournette is a spectacular RB2 option and could be a great RB1 if you picked up wide receivers in the earlier rounds of your draft.

The Jaguars open the 2019 season with a home game against the Kansas City Chiefs at 1 p.m. EDT Sept. 8 at TIAA Bank Field in Jacksonville. The Chiefs were tied for allowing the second-most fantasy points to opposing running backs last season. Fournette should be in all lineups.