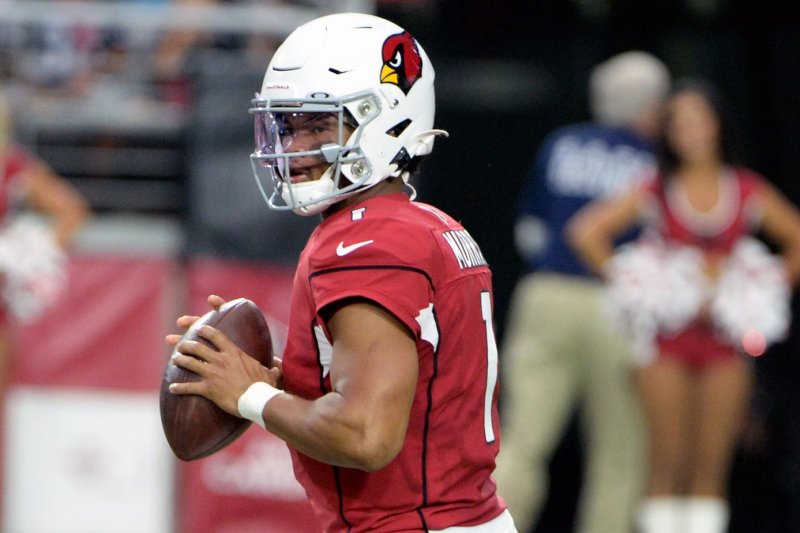 Arizona Cardinals quarterback Kyler Murray failed to lead his team on a scoring drive in a preseason game against the Oakland Raiders Thursday in Glendale, Ariz.  Photo by Art Foxall/UPI | License Photo

Oakland Raiders' running back Josh Jacobs (L) breaks a tackle in the first quarter. Trying to make the tackle for the Cardinals is Chandler Jones. Photo by Art Foxall/UPI | License Photo

Oakland Raiders' Josh Jacobs (L) looks for running room in the first quarter. Coming up to make the play for the Cardinals is D. J. Swearing Sr. Photo by Art Foxall/UPI | License Photo

Oakland Raiders' quarterback Derek Carr (4) throws a pass for a touchdown in the first quarter as Ryan Grant (out of frame) caught the pass for the touchdown. Photo by Art Foxall/UPI | License Photo

The No. 1 overall pick in the 2019 NFL Draft completed just 3-of-8 pass attempts for 12 yards in the 33-26 setback Thursday at State Farm Stadium in Glendale, Ariz. Murray was also flagged twice for false starts in the first quarter. He was in the game for four possessions, before exiting in the second quarter. Murray was also flagged for delay of game and sacked for a safety.

"It's tough because we're not playing the whole game. I don't want to say it's not real, but it's not the regular season, and we're not doing everything that we're going to do."

Murray began the game with a four-yard run. His two first attempts were incomplete. The Cardinals were eventually forced to punt on their opening drive. Oakland's Daniel Carlson kicked a 25-yard field goal on the next drive. Murray and the Cardinals went 3-and-out on the following possession and were forced the punt once again.

Backup quarterback Mike Glennon led the Raiders on a 2-play, 55-yard scoring drive on the Raiders' next possession, highlighted by a 53-yard touchdown toss to Rico Gafford. The Cardinals went 3-and-out once again on their next drive.

Glennon and the Raiders capped off the first quarter with a 12-play, 57-yard scoring drive. Murray was sacked in the end zone for a safety on the Cardinals' next drive. He left the game after the disastrous drive. The Cardinals led 26-0 at the time.

Oakland punted for the first time on their next drive. Backup quarterback Brett Hundley then threw a 40-yard touchdown pass to Trent Sherfield in relief of Murray on the first play of the Cardinals' next drive. Arizona got a 22-yard field goal from Zane Gonzalez to make the score 26-10 at halftime.

Gonzalez added another field goal to start the second half. Raiders running back Mack Brown ran for a touchdown in the third quarter. Cardinals pass-catchers Andy Isabella and Caleb Wilson caught touchdown passes in the fourth quarter.

The Cardinals face the Minnesota Vikings in their next preseason game at 1 p.m. EDT Sunday, Aug. 24 at U.S. Bank Stadium in Minneapolis. The Raiders host the Green Bay Packers at 8 p.m. EDT Thursday, Aug. 22 at IG Field in Winnipeg, Manitoba.

Cardinals coach Kliff Kingsbury told reporters "you have to tune in" when asked if Murray will play against the Vikings.