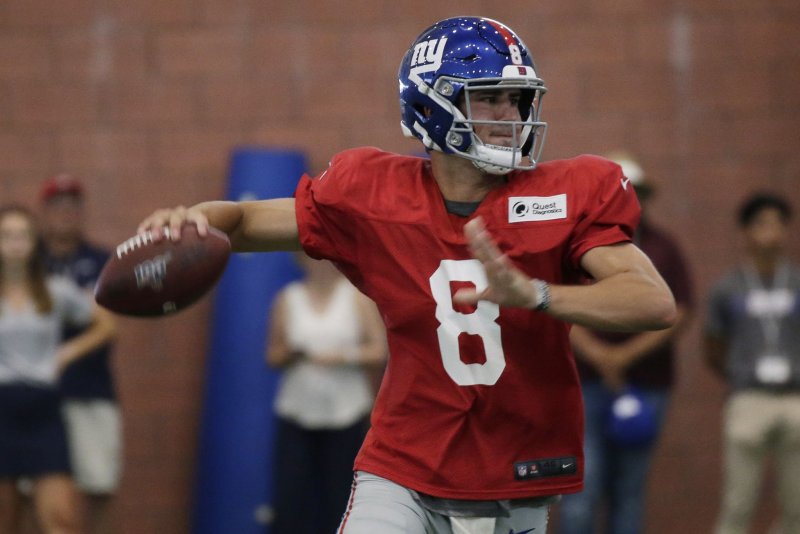 The New York Giants selected quarterback Daniel Jones with the No. 6 overall pick in the 2019 NFL Draft. Photo by John Angelillo/UPI | License Photo

Aug. 8 (UPI) -- New York Giants rookie quarterback Daniel Jones completed all five of his passing attempts and threw a touchdown on his first drive of the preseason against the New York Jets Thursday in East Rutherford, N.J.

The Jets began the game with a seven-play, 75-yard scoring drive, capped off with a three-yard touchdown pass from Sam Darnold to Jamison Crowder.

Eli Manning started the game at quarterback for the Giants. The two-time Super Bowl champion went 3-and-out on his first drive. He completed one pass for three yards before the Giants were forced to punt.

Jones picked up another first down with an eight-yard completion to Bennie Fowler, setting up a 1st-and-10 from the Jets 12-yard-line. He took his next snap out of the shotgun formation.

Jones dropped back and lobbed a pass to the back right corner of the end zone. The pass went around two defenders before landing safely in the hands of Fowler for a 12-yard touchdown.

Jones was 5-for-5 with 67 yards and a touchdown on his first drive with the Giants.

The Giants host the Chicago Bears in their next preseason game at 7:30 p.m. EDT Friday, Aug. 16 at MetLife Stadium in East Rutherford, N.J.