June 11 (UPI) -- The Oakland Raiders will be featured in HBO's "Hard Knocks" in August, the team announced Tuesday.

The annual reality series debuts Aug. 6 and will chronicle the Raiders' final training camp in Oakland before the franchise's planned move to Las Vegas next season.

"Everybody wants to be a Raider," Raiders owner Mark Davis said in a statement. "Now they'll find out what it takes to become one."

"Everybody wants to be a Raider. Now they'll find out what it takes to become one."

Davis and Raiders head coach Jon Gruden previously opposed the idea of cameras filming their camp and wanted nothing to do with the show. Davis told ESPN in March that he would rather fire Gruden than have his team appear on "Hard Knocks."

"I'll just fire Jon and then hire him back," Davis jokingly said. "It would be disruptive. We've got a lot of business to take care of, get ready for the season. I appreciate that they might think we'd be great TV, but we got something to accomplish."

Some Raiders players, including polarizing star receiver Antonio Brown, who was acquired from the Pittsburgh Steelers this off-season, are already embracing the television show. Brown sent out a tweet after the announcement, which led to a response from Oakland starting quarterback Derek Carr.

The other candidates to be featured on "Hard Knocks" this season were the Washington Redskins, New York Giants, Detroit Lions and San Francisco 49ers. The Houston Texans were the last team to make the playoffs after appearing on the reality show, posting a 9-7 record and losing in the wild-card round in 2015. 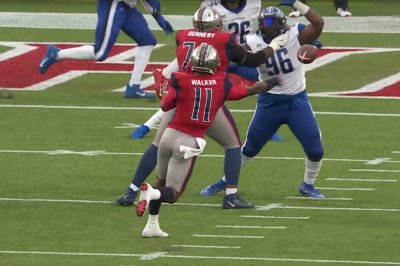