April 30 (UPI) -- The Carolina Panthers have signed tight ends Marcus Baugh and Cole Hunt, both formerly of the Alliance of American Football.

Baugh played at Ohio State from 2014 through 2017. The 6-foot-4, 245-pound pass-catcher had 607 yards and eight scores on 55 receptions in 27 games with the Buckeyes. He spent time with the Oakland Raiders in training camp last season before suiting up for the AAF's San Diego Fleet.

Hunt played for two seasons at Rice before finishing out his collegiate career at TCU. The 6-foot-7, 255-pound tight end had 242 yards and two scores on 25 receptions in 23 college appearances. He spent time with the Los Angeles Chargers during training camp last off-season before joining the San Antonio Commanders in the AAF.

Baugh recorded 13 catches for 208 yards and two touchdowns in the AAF. Hunt had two catches for 13 yards during his stint in the now-disbanded league. 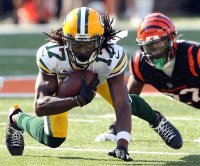