Jacksonville Jaguars cornerback Jalen Ramsey (pictured) and linebacker Telvin Smith are the only players on the team's roster who did not report to off-season workouts. File Photo by Art Foxall/UPI | License Photo

Coughlin spoke to reporters Thursday at the team's annual state of the franchise presentation. The Jaguars held their first day of off-season workouts Monday.

While Coughlin didn't mention Smith and Ramsey by name, Jaguars coach Doug Marrone said Tuesday that they were the only players who didn't attend the voluntary workouts.

"We're very close to 100 percent attendance, and quite frankly, our players should be here building the concept of team, working hard side by side, constructing our bond of togetherness, formulating our collective priorities and goals," Coughlin said.

"Success in the NFL demands struggle. Those who have everything given to them become lazy, selfish and insensitive to the real values of team. The hard work that many try to avoid is the major building block for the development of an outstanding football team.

"It's not about rights and privileges. It's about obligations and responsibility, and the question is: Can we count on you?"

Ramsey also skipped the workouts last year, while he worked out at his father's training facility in Nashville. Smith has attended Jaguars workouts every off-season since he was drafted in 2014.

Marrone said on Tuesday that neither Smith nor Ramsey has responded to him after he reached out.

Ramsey, 24, has a $7.42 million salary in 2019. The Jaguars picked up the fifth-year option on his rookie contract in February, keeping him with the franchise through 2020. The two-time Pro Bowl selection and 2017 All-Pro had 65 tackles, 13 passes defensed and three interceptions in 16 starts last season for Jacksonville. Ramsey has never missed a start during his three-year career.

Smith, 28, is set to make $12.5 million in 2019. The Jaguars signed the linebacker to a four-year, $45 million contract extension in 2017. The fifth round pick in the 2014 NFL Draft had a career-high 134 tackles, two interceptions, two passes defensed, a forced fumble, a fumble recovery and a touchdown in 16 starts last season, after making his first Pro Bowl in 2017.

"With the CBA rules, it's a voluntary period. It's an option," Marrone said Tuesday. "I don't try and concern myself with things that are out of my control. I'm sure they are both working hard."

NFL // 23 hours ago
Longtime Cowboys TE Jason Witten open to playing elsewhere in 2020
Feb. 19 (UPI) -- Veteran tight end Jason Witten wants to play again in 2020, even if it isn't for the Dallas Cowboys. 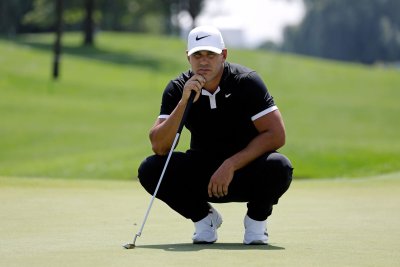