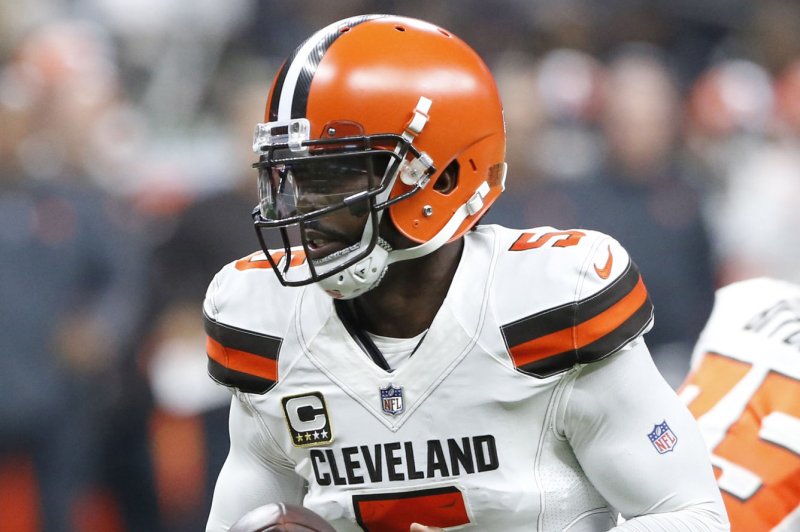 Former Cleveland Browns quarterback Tyrod Taylor could end up with the Miami Dolphins after the team moves on from Ryan Tannehill this offseason. File Photo by AJ Sisco/UPI | License Photo

March 12 (UPI) -- The Miami Dolphins are in the market to replace quarterback Ryan Tannehill and former Cleveland Browns gunslinger Tyrod Taylor could be the guy to do it.

The Dolphins are also expected to consider taking a quarterback in the 2019 NFL Draft.

Taylor, 29, began the 2018 season as the Browns starting quarterback before being replaced by rookie Baker Mayfield. He completed 69.4 percent of his throws for 473 yards, two touchdowns and two interceptions in four games for the Browns. Taylor posted a 1-1-1 record as the Browns' starter.

The 2015 Pro Bowl selection was a sixth-round pick by the Baltimore Ravens in the 2011 NFL Draft. Taylor played his first four seasons in Baltimore before signing with the Buffalo Bills in 2015. Taylor was traded to the Browns before his 2018 campaign.

Taylor owns an 89.6 career quarterback rating. He has completed 61.6 percent of his throws for 9,529 yards, 53 touchdowns and 20 interceptions, while posting a 23-21-1 record as a starter in eight seasons in the league.

The Dolphins are expected to release Tannehill if they can't find a trade partner for the veteran quarterback.