ATLANTA, Feb. 3 (UPI) -- United chants of "Brady, Brady, Brady" showered the field from the majority of the 70,000 fans at Mercedes-Benz Stadium during the defining drive of Super Bowl LIII on Sunday in Atlanta.

And the future Hall of Famer came through once again, guiding the New England Patriots to a 13-3 win against the Los Angeles Rams and snatching his record sixth Vince Lombardi trophy.

"It was an unbelievable year," Brady told CBS. "I guess we fought through it more so than everything. It's unbelievable to win this game."

"We just kept fighting and finally got a touchdown and the defense played the best game of the year."

Brady -- who threw an interception on his first attempt -- threw a perfect pass between three defenders, hitting Rob Gronkowski with a 29-yard pass for the biggest play of the defining fourth-quarter drive. Patriots running back Sony Michel capped off the drive with a two-yard rushing score on the next play, scoring the only touchdown of the game and breaking a 3-3 deadlock with seven minutes remaining. 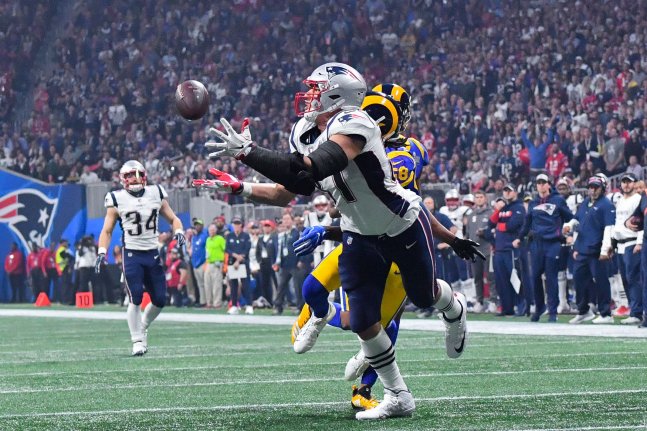 New England Patriots tight end Rob Gronkowski (87) pulls in a 29-yard reception from quarterback Tom Brady, setting up the only touchdown of Super Bowl LIII on Sunday at Mercedes-Benz Stadium in Atlanta. Photo by Kevin Dietsch/UPI

Stephon Gilmore -- the league's top-rated cornerback -- picked off Rams quarterback Jared Goff on the next drive, immediately getting the ball back for the Patriots. New England gashed Los Angeles on the next possession and got a 41-yard field goal from Stephen Gostkowski with 1:16 remaining to go up by 10 points and take most of the remaining time on the clock.

"This is just a great day for football team," Patriots coach Bill Belichick said. "[Patriots owner Robert] Kraft put this together, but it's all about the players ... they played like champions."

Patriots were content slicing up the Rams defense with short passes early on in the game, with Brady attempting just one throw for longer than 20 yards in the first half. That strategy led to a huge advantage in time of possession, but just three points. Gostkowski initially put the Patriots up 3-0 with a 42-yard field goal at 10:29 in the second quarter.

The 3-0 halftime score was the second-lowest in Super Bowl history, trailing only Super Bowl IX's 2-0 total in 1975.

The Rams had eight consecutive punts to start the game before Zuerlien hit a 53-yard field goal with 2:15 remaining in the third quarter to tie the score at 3-3.

Each team exchanged punts before Brady orchestrated the lone touchdown drive of the game, marching 69 yards in five plays. Gostkowski put the Patriots up double-digits after Gilmore snatched his interception on the resulting Rams possession.

Brady passed Pro Football Hall of Famer Charles Haley for the most Super Bowl wins by winning his sixth Lombardi Trophy on Sunday. He completed 21-of-35 passes for 262 yards in the win. He failed to throw a touchdown.

Julian Edelman led all pass-catchers with 141 yards on 10 receptions. Michel ran for 94 yards and a score on 18 carries. Edelman was named Super Bowl LIII MVP for his efforts.

"I wasn't focussed on [MVP], I was just trying to go out and have a good week of practice and do my job," Edelman said. "Sometimes the cookie crumbles that way."

Goff completed 19-of-38 passes for 229 yards. Gurley rushed for 35 yards on 10 carries. Brandin Cooks hauled in eight catches for 120 yards in the loss.

"Patriots fans, this is your sixth championship in the last 18 years," Kraft said. "Truly an unprecedented accomplishment, really managed by exceptional players and coaches to whom all of us are forever grateful."

"But there is one constant throughout 18 years, two men who are the best of what has been done in the history of the NFL: Bill Belichick and Tom Brady. Through their hard work and great leadership I am honored to say for the sixth time, we are all Patriots and once again the Patriots are world champions."