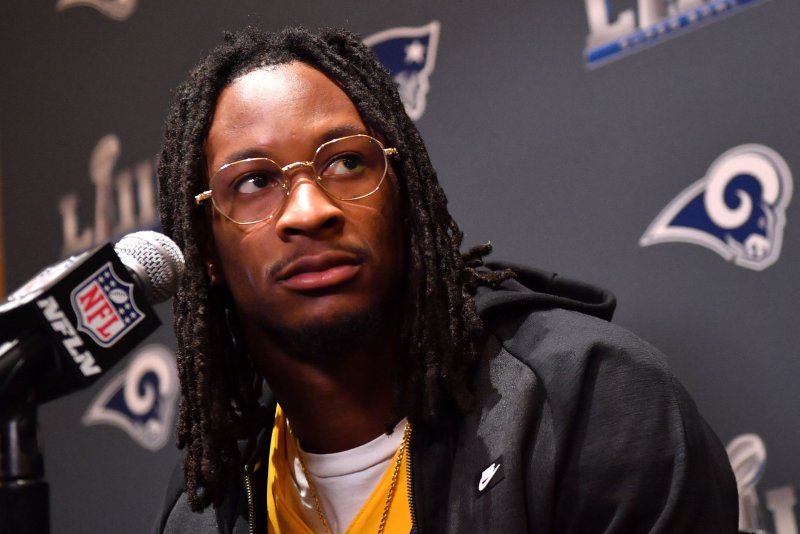 Feb. 3 (UPI) -- Todd Gurley is not expected to be a "workhorse" running back for the Los Angeles Rams against the New England Patriots in Super Bowl LIII on Sunday in Atlanta.

Sources told NFL Network that Gurley will split carries with veteran running back C.J. Anderson. Rams running backs coach Skip Peete told Gurley that he can't have the worklaod he previously had before limiting his carries later in the season.

Gurley was not on the injury report this week, but his knee has limited him at various points during the 2018 season. Gurley had surgery on the knee in 2014.

Sources also told NFL Network that Gurley's cardio what it has been.

Gurley had 1,251 yards and a league-high 17 touchdowns in 14 games this season. He also had 580 receiving yards and four scores on 59 receptions. The three-time Pro Bowl selection was named an All-Pro for the second consecutive season.

The Rams added Anderson in December. The six-year veteran ran for 299 yards and two scores on 43 carries, averaging seven yards per tote in two starts down the stretch. Gurley had at least 20 carries in six games this season. He had 19 touches or more in 12 games in 2018.

Patriots tight end Rob Gronkowski's football future is as murky as ever as the superstar declined to answer if he was retiring after the Super Bowl when pressed this week by reporters.

Something that isn't in doubt is the health of the future Pro Football Hall of Famer. Sources told NFL Network that "Gronk" is feeling 100 percent entering Sunday's Super Bowl showdown. Gronkowksi battled Achilles tendinitis in Week 5 before suffering a back injury in Week 7.

He hasn't been on the injury report during the playoffs. The five-time Pro Bowl selection and four-time All-Pro tied a career-low with three touchdowns this season. He had 682 yards on 47 receptions in 13 games in 2018.

Super Bowl LIII kicks off at 6:30 p.m. on Sunday at Mercedes-Benz Stadium in Atlanta.