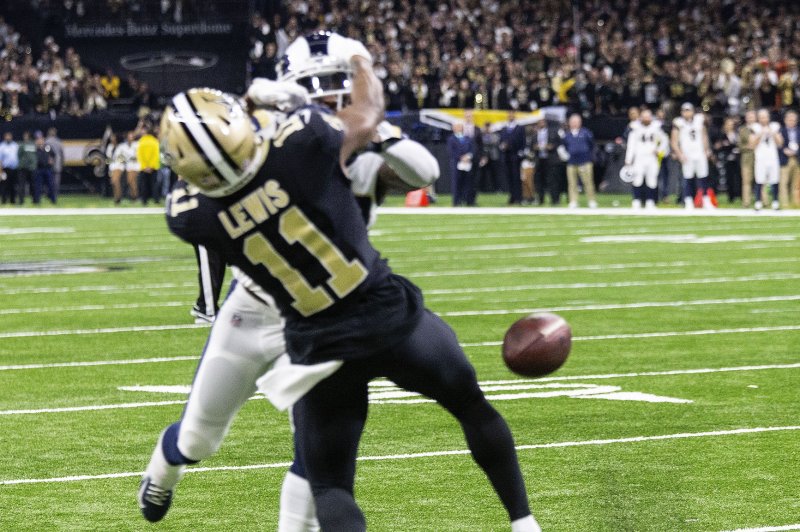 Los Angeles Rams defensive back Nickell Robey-Coleman (23) hits New Orleans Saints wide receiver Tommylee Lewis (11) prior to the ball arriving in the second half of the NFC Championship against Los Angeles Rams on Sunday at the Superdome in New Orleans. Photo by Mark Wallheiser/UPI | License Photo

The missed penalty came with 1:45 remaining in the New Orleans Saints' 26-23 loss to the Los Angeles Rams. Saints quarterback Drew Brees stepped back on a 3rd-and-10 play from the Rams' 13-yard-line. He tossed a pass to his right toward Tommylee Lewis.

Lewis turned back toward the ball but was hit by Nickell Robey-Coleman before the ball arrived. But the Saints weren't awarded a penalty by the referees. New Orleans ended the drive with a field goal to take a 23-20 advantage instead of having a chance at a late score

The Rams would tie the game with a field goal on their next drive to send the game to overtime.

"It was simple. They blew the call," Payton told reporters. "They said it should have never not been a call. They said not only was it interference, it was helmet to helmet. They couldn't believe it. We spoke initially then I called to follow up."

"The first thing [NFL vice president of officiating Al Riveron] said on the phone: 'We messed it up.'"

“It was simple, they blew the call.”

Saints head coach Sean Payton discusses the explanation he got from the officials about the controversial pass interference no-call. pic.twitter.com/nCCFqFmF5N

Robey-Coleman admitted that he arrived early on the play when speaking with reporters after the win.

"Yes, I got there too early," Robey-Coleman the MMQB. "I was beat, and I was trying to save the touchdown."

The Rams battle the New England Patriots in Super Bowl LIII at 6:30 p.m. on Sunday, Feb. 3 at Mercedes-Benz Stadium in Atlanta.