Tennessee Titans quarterback Marcus Mariota (8) is chased by New England Patriots defensive lineman Lawrence Guy (93) as he scrambles in the first quarter of the AFC Divisional Round on January 13 at Gillette Stadium in Foxborough, Massachusetts. Photo by Matthew Healey/UPI | License Photo

The Tennessee Titans are expected to have Blaine Gabbert under center for Sunday night's pivotal game against the visiting Indianapolis Colts with fellow quarterback Marcus Mariota dealing with a stinger injury.

Multiple media outlets reported that Mariota will sit out due to the injury he sustained in Tennessee's 25-16 win versus the Washington Redskins on Dec. 22.

Mariota officially is listed as questionable and reportedly will test his arm in pregame warmups. One source told ESPN, however, that an independent spine specialist has warned the Titans that further damage would put Mariota's ability to throw the football at significant risk beyond this weekend.

"Big game and Marcus Mariota was intent on being out there," NFL Network's Ian Rapoport reported Sunday morning. "But it just doesn't seem like it's going to happen with that stinger."

The Titans (9-6) can clinch a playoff berth by beating the Colts (9-6) on Sunday (8:20 p.m. ET), and would win the AFC South title with a win and a loss by the Houston Texans to the Jacksonville Jaguars. Tennessee also has an outside chance of landing a first-round bye in the playoffs.

Mariota has thrown for 2,528 yards with 11 touchdowns and eight interceptions in 14 games this season. The 25-year-old has also rushed for a career-high 357 yards and two scores.

Gabbert has completed 43-of-72 passes for 461 yards with three touchdowns and two interceptions this season.

The Titans signed free-agent quarterback Austin Davis this week, and he likely will be the backup quarterback against the Colts. 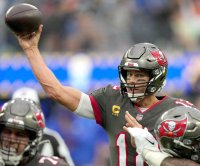 NFL // 3 days ago
Panthers coach Matt Rhule: RB Christian McCaffrey to miss 'a few weeks'
Sept. 24 (UPI) -- Carolina Panthers star running back Christian McCaffrey will miss at least a few weeks due to the hamstring injury he suffered during Thursday night's game against the Houston Texans.