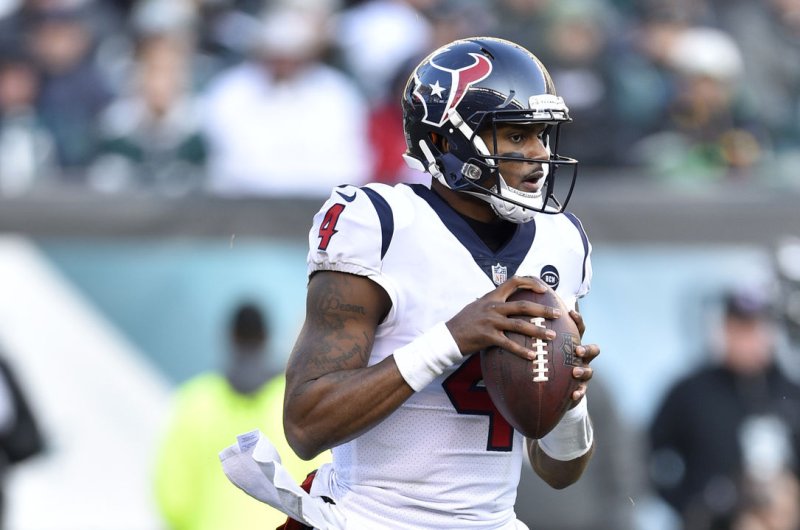 The Houston Texans would guarantee themselves an AFC South title and a home playoff game if they beat the Jacksonville Jaguars in Houston on Sunday.

The Texans (10-5) clinched a playoff berth last Sunday despite their 32-30 loss to the Philadelphia Eagles.

Now the Texans turn their attention to the Jaguars (5-10), who beat the Dolphins 17-7 last week but have lost nine of their last 11 games. That slump includes a 20-7 loss to the Texans on Oct. 21 in Jacksonville.

Jacksonville ranks fifth in the NFL in both total defense and scoring defense, yielding 19.7 points per game.

The Jaguars are making a change at quarterback, going back to Blake Bortles as their starter.

Bortles was benched in favor of Cody Kessler five games ago, but he came off the bench to lead the victory over the Dolphins, and this week Jaguars head coach Doug Marone said Bortles would start the season finale.

Marrone said he is making the move because Bortles' mobility gives the Jaguars a better chance to win against a "very tough" Texans team.

But the last time the Jaguars faced Houston, Bortles was benched in the third quarter after passing for just 61 yards and losing two fumbles.

The Jaguars signed Bortles to a three-year, $54 million contract in February, believing he could be the long-term answer at quarterback. Now it's not clear.

"I just work here, man," Bortles said this week. "I signed up for three years and until those three years are up or they let me go, I'll play when they need me."

Last year, Bortles led the Jaguars to a 10-6 regular-season record and two postseason wins, but this season the Jaguars are just 3-8 in games he started.

"Everything you need to be a successful team and win a Super Bowl in this league is in this locker room," Bortles said.

He has completed more than 70 percent of his passes in each of the past five games and has thrown eight touchdown passes with no interceptions in that span.

Watson had to take the bus to Jacksonville for the teams' first meeting because he had a collapsed lung and injured ribs. He was just 12 of 24 for 139 yards, one touchdown and no interceptions in that game.

Asked about his health for this week's game, Watson said, "I don't have a collapsed lung or a broken rib, so I guess pretty darn well. I feel good, feel solid, able to do everything I want to do and participate, wake up every morning healthy and in good spirits."

He must produce one more time on Sunday.

"There's not really pressure for me or anything because every game is a must-win," Watson said. "Every game I want to win. So, for me, I'm not used to losing, like I said before, and every game, I put that mindset in my head that we must go in and win. We understand the stakes of this game is the opportunity to clinch, but at the end of the day, you can't focus on that. You just have to focus on your job and going out there and performing and let the game come to you. You can't put unnecessary pressure on yourself."

The teams have reversed their status during the season. The Texans started 0-3, but have now clinched a playoff berth. Meanwhile, the Jaguars began the season 3-1, but have fallen apart.

The individual matchup worth watching will be Jaguars cornerback Ramsey against Texans wide receiver Andre Hopkins, who is second in the league in receiving yardage with 1,425.

Cousins, Vikings get shot at playoffs vs. Bears

NFL // 3 days ago
Bucs' Rob Gronkowski retires, leaves door open for NFL return
June 22 (UPI) -- Tampa Bay Buccaneers tight end Rob Gronkowski retired from the NFL for a second time, he announced on social media. His agent later said he "wouldn't be surprised" if he came back in the middle of next season or in 2023.

NFL // 1 week ago
Coach Mike McCarthy fined, Cowboys lose OTA for practice violations
June 17 (UPI) -- The NFL fined Dallas Cowboys coach Mike McCarthy $100,000 and the team lost an organized team activity practice for next off-season due recent practices, which the league deemed to be too physical.

NFL // 2 weeks ago
Don Perkins, six-time Pro Bowl RB with Cowboys, dies at 84
June 10 (UPI) -- Former All-Pro running back Don Perkins, who spent his eight-year NFL career with the Dallas Cowboys, died at the age of 84, the team announced Friday.