Cousins, Vikings get shot at playoffs vs. Bears 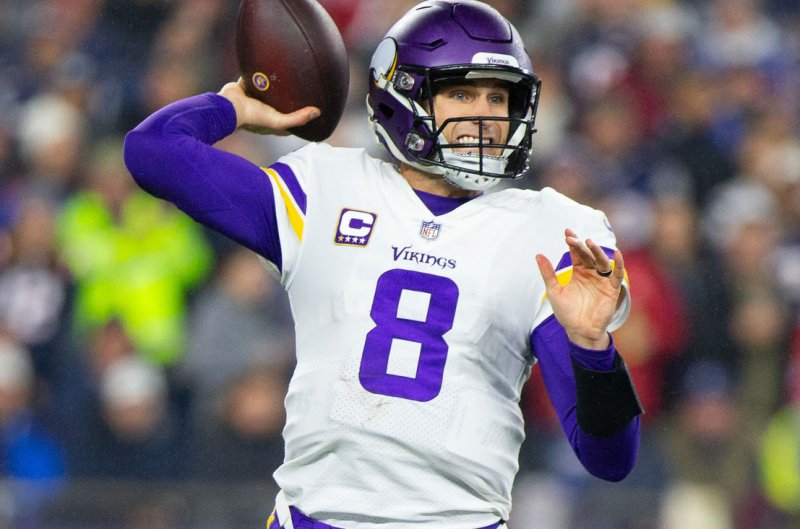 The Minnesota Vikings control their own playoff destiny Sunday when they host the Chicago Bears, who are almost locked into the No. 3 seed in the NFC playoffs.

Minnesota (8-6-1) must defeat or tie Chicago (11-4), or have Philadelphia lose to or tie Washington in order to claim the No. 6 seed and likely earn a trip to the Windy City to face the Bears either Jan. 5 or 6.

Chicago, the NFC North division champion, cannot finish any worse than third but must defeat the Vikings and hope for San Francisco to defeat the Rams in Los Angeles to jump into the No. 2 seed and earn a first-round bye.

"For us, playoffs have already started," Vikings head coach Mike Zimmer said. "We know that we have to win this game in order to get into them. There has to be heightened sense of energy and focus and study time. You have to make sure that your bodies are rested and understand it is going to be a physical football game on Sunday."

This week's game is the reason Minnesota gave Kirk Cousins a guaranteed $84 million to be the team's franchise quarterback, to come out on top of must-win games. Cousins' first season with the Vikings started quickly with him passing for big yardage totals and creeping toward team records.

But the offense slipped at midseason and offensive coordinator John DeFilippo was fired. Minnesota has won two in a row with Cousins and the offense -- particularly the running game -- making strides. Now, the Vikings have just what they wanted sitting right in front of them.

The Bears delivered a blow in the first meeting this season with Chicago's defense giving Cousins and Minnesota fits. The Vikings turned the ball over three times and trailed 22-6 before recovering in the fourth quarter in a 25-20 loss.

"I thought they kind of, what's the best way to say this ... they were dominating us for a long time," Zimmer said of the first game.

The instillation of Kevin Stefanski as interim offensive coordinator and play-caller in place of DeFilippo has had the desired effect. Zimmer said he didn't want the season to be lost.

Minnesota scored a season-high 41 points against Miami in the first game under Stefanski and rushed for a season-high 220 yards. It had its fifth 100-yard rushing game of the season last week against Detroit, with no turnovers.

Vikings running back Dalvin Cook has recorded 100 yards from scrimmage in consecutive games for the first time in his two-year career. He has 271 yards (209 rushing) the past two weeks and 460 scrimmage yards and three touchdowns over the past four games.

The Bears might find they are already playoff ready if they win Sunday in what amounts to be a must game for the Vikings. There's no doubt Minnesota's defense is peaking now with linebacker Anthony Barr playing and healthy. He missed the first Bears-Vikings game.

It's possible Chicago's offense will know it's arrived when it can completely dictate to defenses rather than read them and react.

"We've gotta build that consistency and that mindset that we want to impose our will on defenses and whatever we call and whatever we're playing, we gotta go with the mindset that it can't be stopped," Bears quarterback Mitchell Trubisky said. "I think you've seen it some games and other times we've been a little inconsistent."

The Vikings' Stefon Diggs and Adam Thielen will attempt to become the first wide receiver teammates in NFL history to each record 100 catches and 10 touchdowns in a season. Diggs needs six catches and two touchdowns while Thielen is one score short. Diggs also needs 26 yards for his first 1,000-yard season. Thielen has 110 catches for 1,135 yards.

The Vikings lead the series 60-52-2 and had won three straight before the first meeting this season.