Indianapolis Colts focusing on Sunday's game, not its importance

By Phillip B. Wilson, The Sports Xchange 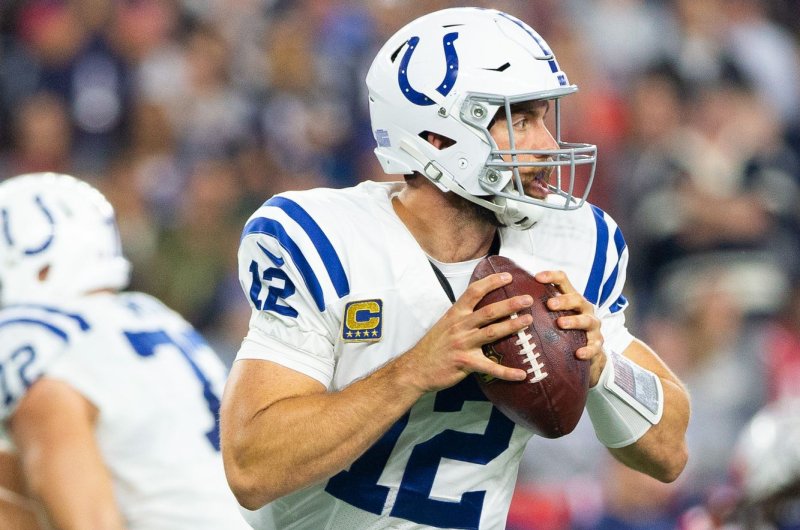 Indianapolis Colts quarterback Andrew Luck (12) drops back for a pass in the second quarter against the New England Patriots on October 4 at Gillette Stadium in Foxborough, Massachusetts. Photo by Matthew Healey/UPI | License Photo

INDIANAPOLIS -- So begins the challenge of the Indianapolis Colts, who will try not to get caught up in the importance of a win-or-go-home, regular-season finale at Tennessee on Sunday night.

The winner of these 9-6 AFC South Division teams earns a playoff berth, most likely the sixth seed. The loser is out. Should the Houston Texans (10-5) stumble at home against Jacksonville, which seems unlikely, then the Colts-Titans winner would claim the division title and a third or fourth seed.

All of that conjecture is what Colts first-year coach Frank Reich wants to keep out of his locker room, as much as humanly possible anyway. He's convinced the Colts were able to climb back from a 1-5 start with wins in eight of nine games because the players stayed focused each week on getting better each day and didn't pay attention to the big picture.

But Reich admitted on a Monday conference call that his team can't completely tune out what's being said about what is essentially a playoff game.

"We've said that, 'Hey we don't live in a vacuum. There is stuff said, done and that's fine,'" Reich said. "So, all the more reason -- just understand that there's this gravitational pull going the other way of the mindset that we want to have. There is a natural gravitational pull from the outside and it's not a negative or evil, it's just not the most productive mindset for us who are playing the game.

"So we have to fight that 'gravitational pull' a little bit harder and just stay focused on what we're doing and getting better every day."

The Colts routed the Titans 38-10 on Nov. 18 at Lucas Oil Stadium. The defense hounded Titans quarterback Marcus Mariota with four first-half sacks, the last re-injuring his elbow and forcing an early exit.

Mariota suffered a stinger and made another early departure in the Titans' 25-16 home win over Washington on Saturday. While his status is uncertain, Titans first-year head coach Mike Vrabel said he was encouraged by how his quarterback was feeling on Monday. The backup is former Jacksonville castoff Blaine Gabbert.

The Titans and Colts both have key players who are hurt -- but the Titans will be without four-time Pro Bowl defensive tackle Jurrell Casey, who suffered a knee injury on Saturday and has been placed on injured reserve. In his 15 starts, Casey had 62 tackles, seven sacks and two forced fumbles.

On the other side of the ball, Colts center Ryan Kelly is banged up and questionable for Sunday's game. He would have seen a lot of Casey if Casey had been available for the finale. Kelly missed three games with a sprained knee ligament, and he suffered a neck injury and didn't finish Sunday's 28-27 home win over the N.Y. Giants on Sunday.

And Colts tight end Eric Ebron, who has scored 13 touchdowns and was selected last week to his first Pro Bowl, is in concussion protocol. He didn't finish Sunday's game, either.

"We are just going to have to monitor that as the week progresses," Reich said of both players.

Colts four-time Pro Bowl wide receiver T.Y. Hilton has been playing on a sore ankle and practiced only once in two weeks. He has been a game-time decision for the past two games, but you wouldn't know he's ailing by how Hilton has played. He has caught 12 passes for 223 yards in those starts.

Reich said nobody knows how much Hilton is hurting because he doesn't say.

"You know that is the thing about T.Y. [Hilton], I don't think he really ever lets us know," Reich said. "I just know it's a lot. I just know it's a lot because of the limited practice time that he's had and then to go out there and do what he is doing. I just think the guy is the best -- incredibly tough, never complains. I have learned with T.Y., I don't go and ask him how he's feeling every day. I just don't do that. He tells me he's going to be there and I trust that. So he's the best."

Hilton missed two games with hamstring and shoulder injuries in Weeks 5 and 6. The seventh-year pro has experienced so much in his career, the team is surprised when he can't suit up.

"But that process is probably sped up by his years in the system here and me hearing it from the trainers and doctors here, 'It's T.Y. He has some superhuman way of playing through stuff,'" Reich said. "Then he does it for us a few times here this year and you see how legit that is. You know, these are injuries, as players we have all experienced these kinds of injuries. So we know when he is doing what he is doing what that means."

Titans defensive players won't need to be reminded of the humbling fact that Colts quarterback Andrew Luck is an unbeaten 10-0 against the team. He completed 23-of-29 passes for 297 yards and three touchdowns in the previous rout.

Luck practically willed his team to Sunday's comeback victory from a 10-point deficit in the third quarter. He drove the Colts on a pair of touchdown drives, the latter a 1-yard scoring pass to wide receiver Chester Rogers. Reich had called for a run, but Luck saw the defensive alignment and checked to the pass.

"I can't say enough of how much I appreciate Andrew on the sideline," Reich said. "If and when we struggle early, he is just the same guy. He's positive, he's, 'Hey, let's do one play at a time.' He's talking to everybody. He is literally talking to everybody on the sidelines, then right before we go out for the next series, he will come over and we will have a quick chat. He will talk like that to me. I love his approach, it's just infectious, it's positive and I think it's making a big impact on the offense and on the team."

"After [Sunday's] game we just said, 'Hey, we've got one week guaranteed to us. That's it. So let's make the most of it every day, get better and get ready for this game coming up on Sunday,'" Reich said.

Not long after the Pittsburgh Steelers lost at New Orleans on Sunday night, NBC announced the Colts-Titans game would be flexed to an 8:20 p.m. Eastern time kickoff. The Steelers' loss enabled the Colts to move into the sixth and final AFC playoff spot, by virtue of the head-to-head tiebreaker advantage over the Titans.

Trailing 17-7 at halftime on Sunday, Reich admitted there were some "passionate" statements made in the locker room about the "embarrassing" effort. It wasn't just coaches. Players spoke up, too. One of those was Luck, who isn't known for giving fiery speeches, but raised his voice this time, much to the surprise of others. The Colts were almost late coming out for the third quarter. "Passionate's a good way to describe it," Luck said. "What are the things we can improve? And I think we did improve. I think we did come out of that tunnel with a better mindset than we started the game." Luck did his part by completing 16 of 23 passes for 214 yards and two TDs after halftime.

Luck's TD pass to Rogers marked the passer's 21st game-winning drive in the fourth quarter or overtime in his 85-game, regular-season career.

Luck has now completed a single-season, career-high 406 passes this season. And the number should be significantly higher because the Colts have dropped 24 passes, second most in the league, according to The Washington Post.

Not long after Kelly exited, Luck took his only sack of the game. That was by no means a coincidence. Luck hasn't been sacked when Kelly has been on the field the last six games. The Colts lead the league with just 17 sacks allowed.

The Titans are on a four-game win streak in large part because they've relied upon running back Derrick Henry, who has rushed for 532 yards and eight TDs in that stretch. That includes a monster 238-yard, four-TD effort against Jacksonville. It's especially worth noting considering the Colts are one of just three teams to not allow a 100-yard rusher this season. The Colts limited Giants rookie running back Saquon Barkley, the NFL's third-leading rusher, to just 43 yards on 21 carries. NFL leading rusher Ezekiel Elliott of Dallas had 87 yards rushing the previous week against the Colts. The last time the Colts faced Henry, he ran for 46 yards on nine carries.

Hilton surpassed 8,000 career receiving yards on Sunday. He's one of just three players to do that since he entered the NFL in 2012.

Kicker Adam Vinatieri will move into third place in career games played (353) in NFL history on Sunday. He will also pass Robert Mathis and Justin Snow and move into sixth place with 194 games played for the Colts.

Rookie running back Nyheim Hines caught four passes against the Giants to boost his season total to 60, which ties Austin Collie (2009) for fourth-most by a Colts rookie since 1970.

Defensive tackle Denico Autry had his three-game sack streak end because the Giants committed to double-team blocks most of the time. Autry had six sacks in the previous three starts to boost his team-leading total to nine. He finished this game with two tackles, including one for a loss.

Rookie linebacker Darius Leonard has widened his NFL total-tackle lead to 23 with 155 stops. He added nine against the Giants. He's made the third-most tackles for a Colts player in a single season since 1994.

Leonard and Broderick Thomas are the only players in NFL history to have more than 150 total tackles and seven sacks in a season.