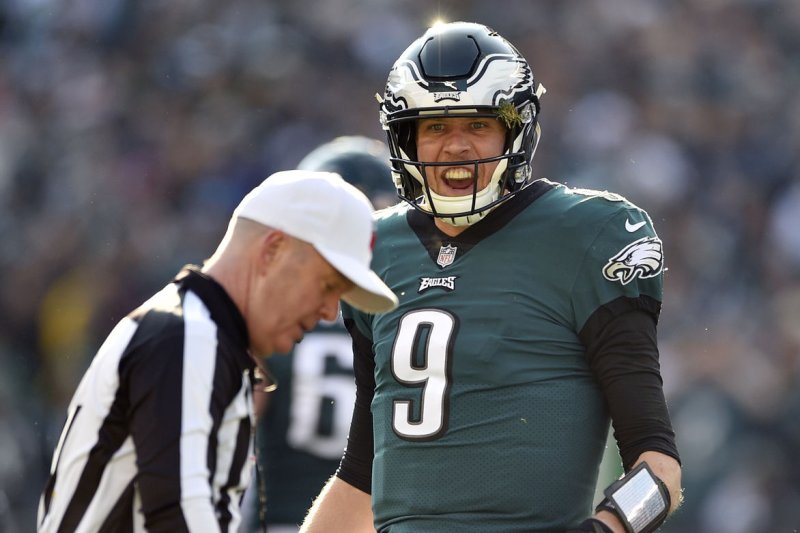 Philadelphia Eagles quarterback Nick Foles (9) throws the ball during the first quarter against the Houston Texans on Sunday at Lincoln Financial Field in Philadelphia. Photo by Derik Hamilton/UPI | License Photo

Philadelphia Eagles tight end Zach Ertz (86) runs the ball up the field for a touchdown against the Houston Texans on Sunday at Lincoln Financial Field in Philadelphia. Photo by Derik Hamilton/UPI | License Photo

Defensive end Chris Long thought that was the end of Nick Foles.

The Eagles quarterback had just been speared in the chest by Houston Texans defensive end Jadeveon Clowney and was writhing in pain in the end zone after completing a 19-yard pass to Alshon Jeffery on third-and-10 from the Eagles' own 11-yard line.

The Eagles once held a 13-point lead in the fourth quarter, but now trailed by a point with less than two minutes to play thanks to some amazing throws from Houston quarterback Deshaun Watson.

"I thought they were going to bury him next to the statue [of Foles and Doug Pederson engraved with Philly Special outside Lincoln Financial Field]," said Long. "They were going to have the statue, and then like a little tomb for him. But he got up, and that was cool."

"He has to get up," added Jeffery, when asked what he thought when he saw his quarterback down and in pain.

Foles rose up after sitting out one play, re-entering to a standing ovation from the Lincoln Financial Field crowd to resume leading his team to a game-winning, 35-yard field goal from Jake Elliott. Elliott's kick came as time expired and launched the Eagles to a 32-30 victory, their fourth win in the last five games.

The quarterback threw four touchdown passes and 471 yards, breaking the club record for yards passing in a game held by Donovan McNabb, who threw for 464 yards on Dec. 5, 2004. Foles now has four 400-plus passing games as a member of the Eagles, which broke the team record of three held by Sonny Jurgensen from 1957-63.

With a salary cap hit of $20 million next season, this may have been Foles' final home game as an Eagle, and he was aware of it.

With an ineffective running game, Foles was called on to attempt 49 passes, 35 of which he completed, including an 83-yard bomb to Nelson Agholor for a touchdown that gave the Eagles a 23-16 lead with 2:18 to play in the third quarter.

It was the longest completion in Foles' career and the longest catch in the career of Agholor, who ended with 116 yards and five catches.

Zach Ertz also had a record-setting day, catching 12 passes for 110 yards and two touchdowns. Ertz has now made 113 catches this season, surpassing the record for most receptions by a tight end in a single season that had been held by Jason Witten, who caught 110 in 2012. Ertz has 1,148 yards receiving this season and his eight touchdowns tie the career-high he set last year.

"I don't think I've truly come to grips with it, yet," said Ertz, who credited former Eagles tight end Brent Celek and his family for their help. "It is special. Having that record is something that, hopefully, will last a while. If not, I'll be happy for the next guy to do it, but it is special."

Foles helped make it so.

After getting up from the spear by Clowney, which drew a roughing-the-passer penalty, Foles jogged to the sideline and the crowd went crazy. Backup Nate Sudfeld entered, threw one incompletion, and Foles trotted out. The crowd went even crazier.

"He [Clowney] got a good one on me," said Foles. "The trainers got out there, I was able to get my breath back. My ribs were a little sore, but overall I felt great. I was ready to roll."

Asked if he heard the crowd willing him to get back in the game, Foles said: "I was more focused on the people in front of me. I had no clue Alshon had caught it. The crowd was amazing at the end of the day. It's always a joy to come out here and play in the 'Linc' and wear this jersey and they were amazing. I'm grateful for that."

On his second play back in after the injury, staring at another third-and-10, Foles found Ertz stumbling on his route toward the sideline. The quarterback said he put some air under it to give Ertz some time to find his footing. The play was a success, with Ertz hauling it in and crawling out of bounds for a 20-yard gain to put the Eagles at the Texans' 35 with 1:23 left in the game.

A 16-yard run by Darren Sproles set up the Eagles' game-winning field goal. Sproles played like he was 25 years old again, not 35, finishing with three catches for 76 yards, including a catch-and-run 37-yard score that gave the Eagles a 7-0 lead in the first quarter. Sproles also added 32 yards rushing on nine carries.

After Agholor's 83-yard touchdown, the Eagles went up 29-16 on Ertz's second TD catch, a 23-yarder, with 10:21 to play. Elliott missed the PAT, however, allowing the Texans to take the lead on a beautiful pass from Watson to Vyncint Smith, who did a remarkable job getting both feet in before sliding out of the back of the end zone. The score and ensuing PAT made it 30-29 with 2:02 remaining.

The Texans missed their chance to clinch the AFC South title. They must beat the Jaguars next Sunday to clinch it. The loss also dropped them from the No. 2 seed to the No. 3 seed, meaning they no longer have a bye unless the New England Patriots stumble.

As for the Eagles, they are now 8-7 and go to Washington next Sunday still alive for a playoff spot. The only trouble is, they don't control their own destiny. They have to beat the Redskins and hope the Minnesota Vikings lose at home to the Chicago Bears in order to claim the sixth and final playoff bid.

"It's tough not to control your own destiny," said Ertz. "At the same time, if you focus on everything else that is going on and we have a slip up because we're not focusing on our jobs, it's really not going to matter. We've said for a while now that every game is a must-win game. That's the way we approached these last five games.

"We were 4-6 at one point after the loss to the Saints when we just got smacked down there, but no one quit and everyone was focused on doing their job better. I think that's the mark of a good team."