Oakland Raiders in talks to play in San Francisco next season

Raj Mathai of NBC Bay Area reports that the Oakland Raiders are in talks with the San Francisco Giants about the possibility of playing at AT&T Park next season.

A Raiders source told Mathai that the Raiders playing on the other side of San Francisco Bay for one season is a "distinct possibility."

Owner Mark Davis is moving the Raiders in 2020 to Las Vegas, where a new stadium is being built, and the City of Oakland recently sued the Raiders and the rest of the NFL over the move.

That prompted Davis to opt out of a contract to have the Raiders play one more season in Oakland.

However, there are questions about the San Francisco plan.

That means the 49ers might try to block the move, which might mean the NFL could tell the 49ers to let the Raiders play in San Francisco or at Levi's Stadium.

There also has been speculation that the Raiders might share Levi's Stadium in Santa Clara with the 49ers next season.

The Raiders played in San Francisco during their first two seasons, 1960 and 1961, at Kezar Stadium and Candlestick Park, before Frank Youell Field and then the Oakland-Alameda County Coliseum were built in Oakland. 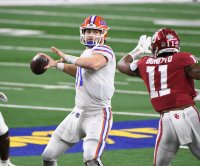 NFL // 5 days ago
NFL Draft: Patriots' Mac Jones, Bears' Justin Fields expected to be backups
CLEVELAND, April 30 (UPI) -- The New England Patriots picked quarterback Mac Jones and the Chicago Bears chose quarterback Justin Fields in the first round of the 2021 NFL Draft, but both top prospects are expected to start the season on the bench.