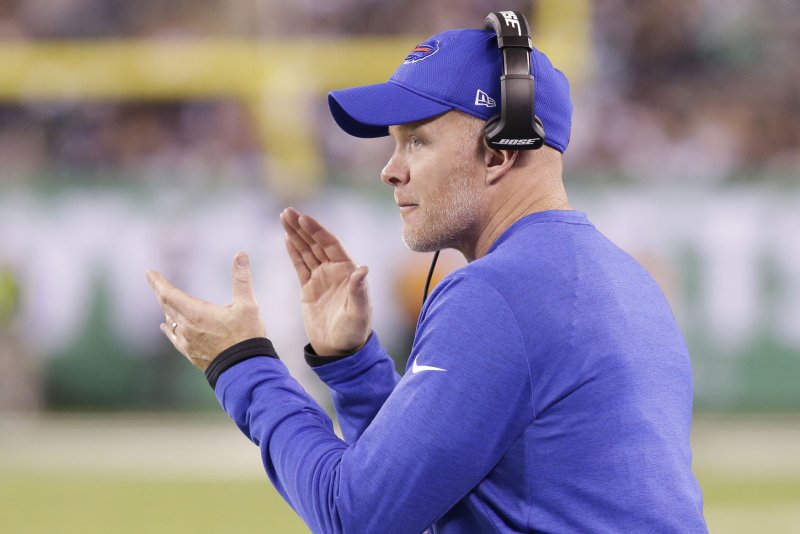 Buffalo Bills head coach Sean McDermott stands on the sideline in the first half against the New York Jets in Week 9 of the NFL season on November 2, 2017 at MetLife Stadium in East Rutherford, New Jersey. Photo by John Angelillo/UPI | License Photo

One of the attributes that is unmistakable about head coach Sean McDermott's first two Buffalo Bills teams is that they give maximum effort each and every week. This is nothing that should be commended, because there should never be a question about this for any team in the NFL.

But look around the league and it can be seen, especially at this time of the year when a playoff berth is no longer possible. Teams tend to mail it in and count the days until the end of the season.

Last year, the Bills won five of their first seven games, then went into a horrendous three-game funk where they got embarrassed, in succession, by the Jets, Saints and Chargers. Their season could have imploded, but instead, the Bills ventured into Arrowhead Stadium and knocked off the playoff-bound Chiefs, and they went on to win four of the last six to squeeze into the postseason.

This year, the Bills started 2-7 and were a team suffering from one of the worst offenses in recent memory. Had they stayed on that path, they would have been in line for the No. 1 overall pick in the 2019 NFL Draft. But the Bills have now won three of their last five including a 14-13 comeback victory over Detroit on Sunday.

While they are eliminated from the playoffs, they continue to play hard for McDermott, and they are doing so with several young players essentially auditioning for jobs next season.

"Yeah, I'm proud of the guys and the way that they battled," McDermott said. "I thought the character of our football team, the men in our locker room was on display today."

McDermott has a grip on the locker room, without being an invasive presence. He gives his players space, he allows his leaders to lead and his coaches to coach, and in return they have given him maximum mental and physical effort in meetings, in practice, and certainly in the games.

This is one of the weaker rosters, top to bottom, in the league, being led by rookie quarterback Josh Allen on offense and a rookie middle linebacker in Tremaine Edmunds on defense. But the growth and maturity is starting to show and since a blowout 41-9 loss to NFC North champion Chicago in early November, the Bills have been a tough out for every opponent, too tough, in fact, for the Jets, Jaguars and Lions.

"This is a special team," offensive tackle Dion Dawkins said. "We're not playing for playoffs anymore, we're playing for each other. And games like this are just showing character for each person that's on that field. Are you going to give that extra leg for the man next to you or are you just going to say, 'Well, forget it. The season's over, let's just get it over with.'"

After going through a gruesome stretch where they scored only three touchdowns in 26 quarters, the Bills' offense has started to find success with Allen learning on the fly. It has been a wild ride of ups and downs for Allen, but he's now 4-5 as a starter and has directed a pair of fourth-quarter comeback victories -- including Sunday when his 42-yard touchdown pass to Robert Foster won the game with 10:26 left.

It was yet another sign of a young team starting to figure things out.

"You've got to win close games in the NFL," McDermott said. "That's the takeaway from this game, you have to win close games, however they come out. You also have to score points and stop them. I'd like a larger margin; that would make the hair I have left stay on the top of my head. That's what we're looking for. We have a lot of work to do."

The good news is this team is willing to do it.

QB Josh Allen became the first Bills quarterback to lead two fourth-quarter comeback victories in the same season since Kyle Orton in 2014. He also rushed for his sixth score, which is tied for second-most by a Bills QB in one season.

RB LeSean McCoy sat out of the game with a hamstring injury. It's the second full game he has missed, and he also left two games early in the fourth quarter of what has become a completely lost season.

WR Robert Foster had his third 100-yard game of the season, the first Bills wide receiver to do that since Sammy Watkins in 2015. He now leads the league with 24.6 yards per catch.

WR Zay Jones had another lackluster game as he made just one catch for 11 yards, though he did draw a 23-yard pass interference penalty.

LB Tremaine Edmunds was in on eight tackles.

RB Marcus Murphy started in place of the injured LeSean McCoy and Chris Ivory, but after gaining 35 yards, he left with a dislocated elbow, meaning he may be done for the season.

RB Keith Ford made his NFL debut and gained 46 yards on 14 carries, much of that after Marcus Murphy left the game.

FS Jordan Poyer led the Bills with 11 tackles, and that set a new career high.