By
Phillip B. Wilson,The Sports Xchange 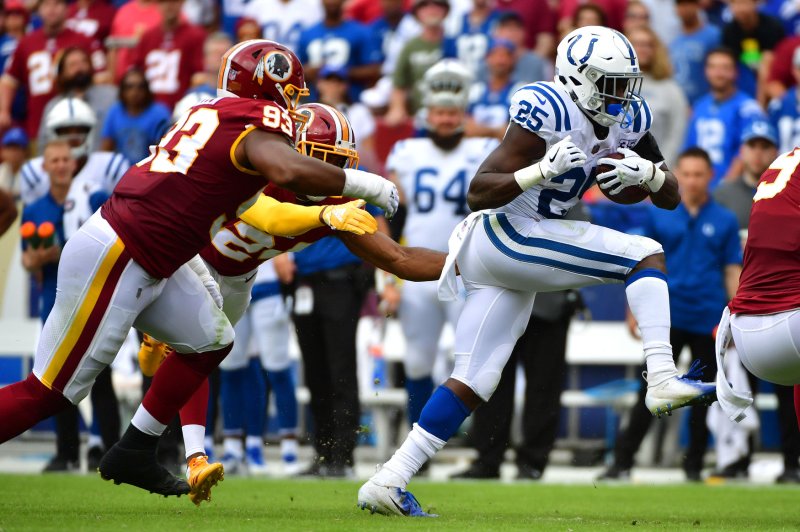 Indianapolis Colts running back Marlon Mack (25) runs against the Washington Redskins in the second quarter on September 16, 2018 at FedEx Field in Landover, Maryland. Photo by Kevin Dietsch/UPI | License Photo

INDIANAPOLIS -- A day after handing the Dallas Cowboys their first shutout loss in 15 years, a joyful contingent of Indianapolis Colts players -- including quarterback Andrew Luck -- sang Christmas carols to youngsters at Riley Hospital for Children.

Colts head coach Frank Reich acknowledged on a Monday conference call that his team has made its share of happy noise in the community after improving to 8-6 with a 23-0 home win over the Cowboys. After a 1-5 start, the Colts have surged with seven wins in eight games to have a legitimate shot at the AFC's sixth and final playoff spot.

"I can absolutely feel a significant difference in the last few weeks compared to the beginning of the year," Reich said of the buzz. "I could certainly feel it in the stadium against the Dolphins [27-24 home win on Nov. 25]. That place got so loud at the end of that game, but then like you said I can feel it."

The Baltimore Ravens (8-6) have the tiebreaker edge for that spot now but should the Ravens or the AFC North-leading Pittsburgh Steelers lose once in the final two weeks, the Colts can control their own destiny with two more victories. The Colts host the New York Giants (5-9) Sunday at Lucas Oil Stadium, then finish the regular season at AFC South rival Tennessee (8-6), in what could be a showdown for that playoff spot.

If the Colts make the playoffs, it would be just the third time since the 1970 AFL-NFL merger that a team qualifies for the postseason after losing five of its first six games. Cincinnati (1970) and Kansas City (2015) are the others.

Pro Bowl wide receiver T.Y. Hilton told SI's Albert Breer that the season's turning point at 1-5 came in a players' only meeting after a road loss to the New York Jets. Hilton played at "about 70 percent" with an ankle injury on Sunday yet caught a team-high five passes for 85 yards. He's had 77 or more receiving yards in six consecutive starts.

As much as Luck is heaped with praise as a team leader who is enjoying a career year behind a solid offensive line, the Colts' defense is just as deserving of recognition.

It might come as a bit of a surprise that the Colts are one of just three teams to rank in the top 10 in offense and defense, in terms of total yards gained and allowed. The Steelers and Los Angeles Chargers are the others. The Colts have been ranked that high on both sides just twice since 1970 -- in 2002 and 2007.

The most impressive defensive play came on a fourth-and-one rush at the Colts' 3-yard line in the second quarter, when NFL leading rusher Ezekiel Elliott was stuffed in the backfield for a 2-yard loss and his fumble was recovered by the Colts' Jabaal Sheard.

The Colts' defense ranks second in tackles for loss with 84 and is the only team with four players ranking in the top 25: Defensive ends Margus Hunt and Sheard have 13, defensive tackle Denico Autry and rookie linebacker Darius Leonard have 12.

Autry had his sixth sack in three games against the Cowboys. Rookie defensive end Tyquan Lewis had his first two NFL sacks. Overall, the Colts had four tackles for losses with five quarterback hurries.

Reich said it starts with the defensive line buying into the team's emphasis on effort in practice.

"It is the effort at which they practice all the time," he said. "It's a mentality that this is a group deal and the effort that is required from each one of the group even when it helps the other guy to get off even if you're not getting off. That mentality just has to be a total commitment by all those players."

The Colts snapped the Cowboys' five-game win streak despite Luck not throwing for a single touchdown and finishing with 192 yards passing. That's because an offensive line bolstered by the return of center Ryan Kelly dominated in the trenches. Second-year running back Marlon Mack ran for a career-best 139 yards and two touchdowns against a defense that ranked No. 2 in fewest points allowed and No. 4 in fewest total yards allowed.

"When I saw those holes I was like, 'Yeah, it might be a good day,'" Mack said of setting the tone with 33 yards on his first five carries on the initial scoring drive. "Holes like that don't come often and when the guys are blocking like that in front of you, you're just [like], 'Oh yeah, these big guys are moving them, so step your game up.'"

RB Marlon Mack ran for a career-best 139 yards and two touchdowns against the Cowboys. Mack enjoyed his third 100-yard rushing game of the season, the first time a Colts back has done that since Joseph Addai had four in 2007.

WR T.Y. Hilton had five catches for 85 yards against the Cowboys. Since Week 10, Hilton has an NFL-best 718 receiving yards.

LB Darius Leonard led the Colts in tackles for the eighth time with 11 stops, including nine solos. He also had one tackle for loss and two passes defended in addition to recovering the blocked field goal on the game's opening possession.

S George Odum, an undrafted rookie, had the first interception of his career and made five tackles.

K Adam Vinatieri made field goals of 43 and 44 yards to pass Gary Anderson (161) for the most field goals from 40-49 yards in NFL history.