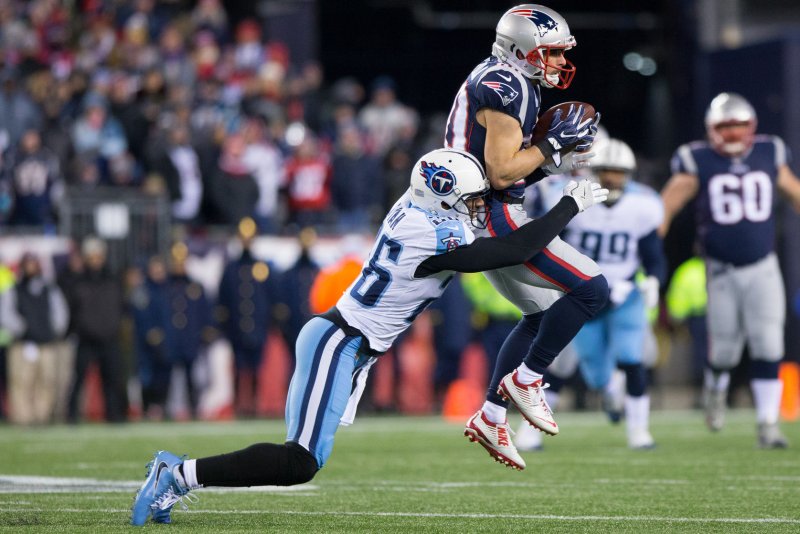 Former New England Patriots wide receiver Danny Amendola (80) is tackled by Tennessee Titans cornerback Logan Ryan (26) on a 15-yard reception in the first quarter of the AFC Divisional Round on January 13, 2018 at Gillette Stadium in Foxborough, Massachusetts. Photo by Matthew Healey/UPI | License Photo

Tennessee Titans cornerback Logan Ryan took to social media on Monday morning to announce that he will miss the remainder of the season with a broken left fibula.

Ryan sustained the injury during the Titans' 17-0 win over the New York Giants on Sunday at MetLife Stadium.

The 27-year-old felt he was in the right to go public with the news.

"I believe a player should break his own news about his body," Ryan wrote on Twitter above his attached message.

"I poured my heart and soul into this season so it's unfortunate. However, anyone who knows me knows how relentlessly I will train to come back a better player with fewer weaknesses. I am proud of how I played, I'm proud of how my team is playing, and I'm proud I was able to walk off the field with a broken leg. I will continue to support the team and coach up the DB's while we make this run for the playoffs. Also I am proud to say my 76 tackles this season raised over $12,000 dollars for animal rescue. It's all love."

Breaking News: I believe the player should break his own news about his body. pic.twitter.com/YUlTiuOMnp

Ryan recorded four sacks and eight passes defensed while starting all 14 games this season for the Titans (8-6), who host the Washington Redskins (7-7) on Saturday (4:30 p.m. ET).

With the 5-foot-11, 195-pound Ryan sidelined, Tennessee will look to LeShaun Sims and Joshua Kalu behind starters Malcolm Butler and Adoree' Jackson.

Ryan has collected 381 tackles, 6.5 sacks and 13 interceptions in 93 career contests since being selected by the New England Patriots in the third round of the 2013 NFL Draft.